Block any app from the internet on Android

This post provides steps you can easily use to block and unblock a selected app from the the internet on your android device.

Have you ever wanted to block a particular app from gaining access to the internet. May be even group of apps.

But, however, you lack the necessary tools or  have been thinking of an easier way to go about it.

Well, this post will give you an easy guide to go about blocking any app of choice from accessing WiFi or Mobile Data. By so doing, you block app/s from gaining internet access.

If you already have a way of restricting specific apps from gaining access to the internet on your android device; that’s awesome, but in addition, you could still learn something new here or even find this one, I’m about sharing, even, way more easier.

Why block some Android apps from the Internet

Isn’t it cool to be able to go incognito on auto-opening apps ?, like, Whatsapp, Instagram, Snapchat and the rest.

Which usually, push up timely notifications to your smartphone screen on friends activities.

Usually, when ever your internet connection is active. To be able to have control over this, is what I would say, as having freedom to not be engrossed or trapped by an app.

But, rather, having the freedom to plug and unplug yourself on an app; whenever you like.

In other words, this post will present a way you can block and unblock an app from the internet.

Thereby, enabling users to decide when they can easily say: ” Ok!, I need some alone time for myself, away from all the apps.” Without, necessarily, having to uninstall those apps or even throw their smartphones into the cupboard.

You would agree with me, that at least, if not everyone, but, some times, one do have such feelings.

If you ever find your self in such situations, don’t worry. A good step to go about this and gain that little freedom you desire or to unplug yourself; is your been able to either allow or disallow certain apps from gaining  internet access when you feel like. Thereby, stopping all incoming notifications at that time.

However, to make this  happen, you don’t necessary have to do away with your phone or uninstall an app.

A simple action of blocking and restricting internet access of an app for a period of time when you deem fit and also, being able to turn back access to the internet for an app or group of apps, is the best way to solve this.

How to block specific Android apps form the internet

Therefore, this brings us to the utility app, called AFWALL+. With AFWALL+ application, you can easily block and unblock any app of your choice from gaining access to the internet when ever you want on your android device.

This brings us, to how to go about this. Using AFWALL+, to control the apps that connect to the internet and the ones that don’t on an android device, is pretty straight to the point.

Firstly, you will need an android device that’s already rooted. There are a number of tutorials in the internet that covers this.

So, I’m not going to delve into this, you can even find some in this website, or you can outsource. I’m just, going to assume, you are already running on a rooted android device.

Whatever, the model of your android device, their is definitely a root for it. If you can find it in this website, just outsource on the web.

Secondly, install AFWALL+ from Google Playstore or find it on the web, by making a search query on Google, like: “AFWALL apk Download”.

If that would be difficult task, use this link to download the apk file and install directly to your device:   Download: AFWALL.

Thirdly, install the app on your android device. Run it and set rules to either block or unblock specific apps from accessing the internet.

For example, you may want to use this app to block Whatsapp from connecting with your mobile data. Even when your internet network is still turned on.

Here is a step by step guide below, taken from the screenshot of my device:

How to block and unblock Apps from internet Access via AFWALL+

I’ll assume you have already rooted your android device. 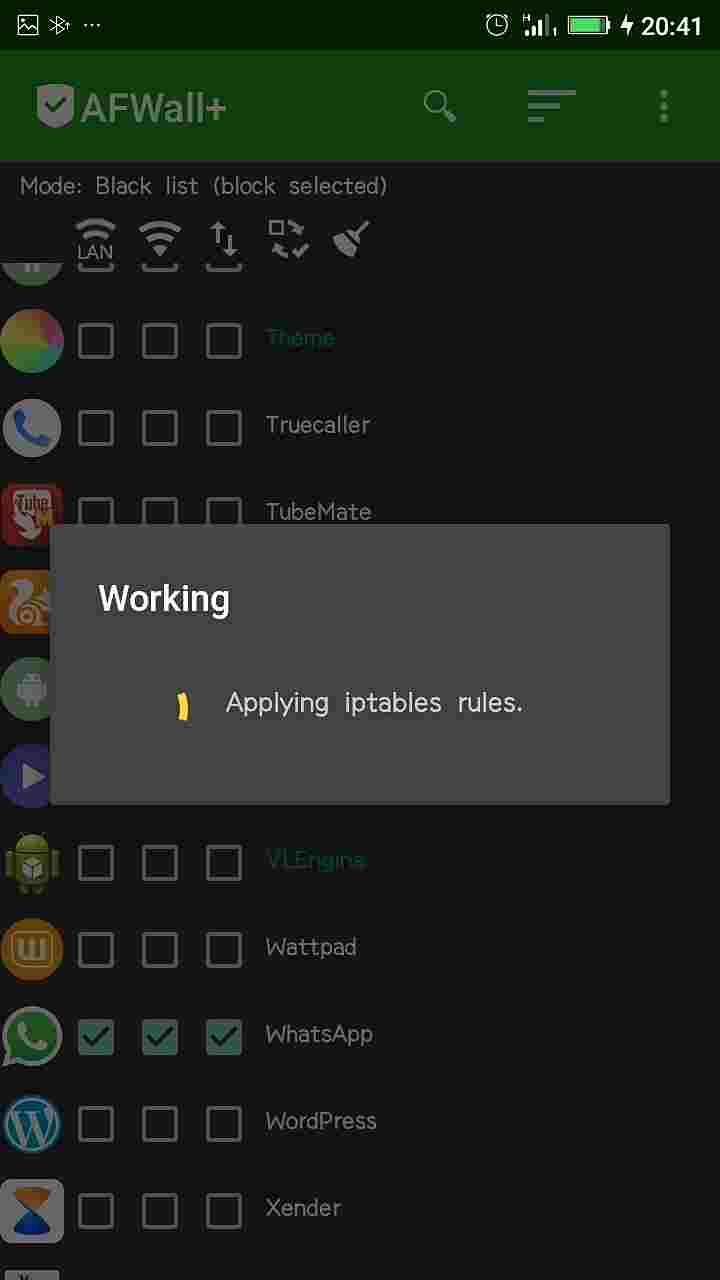 To unblock and allow selected apps to connect to your data, simply enter AFWALL+ app again. Untick the apps you had blocked. Then click on Apply button at the right side of the menu.

Here is a video showing the various steps below. The video may interest you, just in case, the writing bores you: