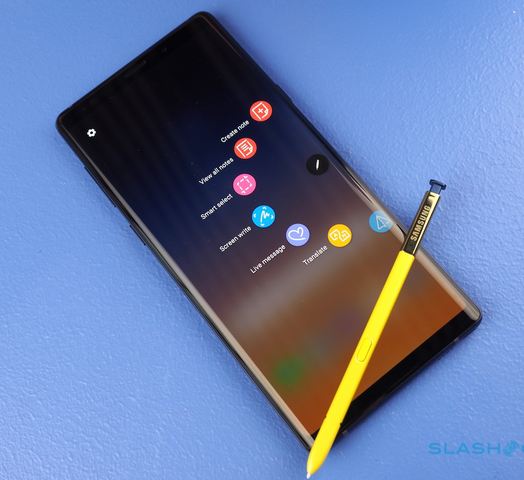 The Galaxy Note 9 is already around the corner. And unveil already imminent following announcement in New York. The Galaxy Note 9 will first come in ocean blue colour and Lavender purple. Then, afterwards we get other coloured variants like the popular black default ( we have seen in previous Note releases), Metallic Copper and Midnight editions. Samsung Galaxy Note 9 comes with S Pen. With the S Pen you can do stuffs on memo apps. Plus, this new Note 9 blends the colour of the S Pen with the digital ink to create similarity and uniformity.

The Galaxy Note 9 comes with a 6.4 inches display with screen resolution measuring 1440 x 2960 pixels. 8.8 mm thin and weighs 201 grams. The smartphone runs on Android 8.1 OREO operating system. At the helms of affairs is the Octa-Core processor = combination of (2.7GHz Quad Core, 1.7GHz Quad Core Cortex A55 and M3 Mongose). The processor is also supported by a Mali-G72 MP18 GPU, which handles for all of the graphics demands.

Entry level Samsung Galaxy Note 9 sports 128GB of built in storage with 6GB LPDDR4 RAM memory. Exynos or Snap chip set. While, the second variant stuns with 512GB of built in storage, coupled with 8GB of RAM. The robust 512GB storage will offer robust space for documents, videos and other large demanding games. The 128GB inbuilt storage edition of Samsung Galaxy Note 9 will be available to popular US carriers like, AT and T, T-Mobile, US Cellular and Verizon Wireless; amongst others.

Samsung Galaxy Note 9 has inside of it a 4000mAh capacity battery. With 12MP main sensor. Other sensors that come with the Galaxy Note 9 are: Accelerometer, Barometer, Gyroscope, Light sensor, Proximity sensor.