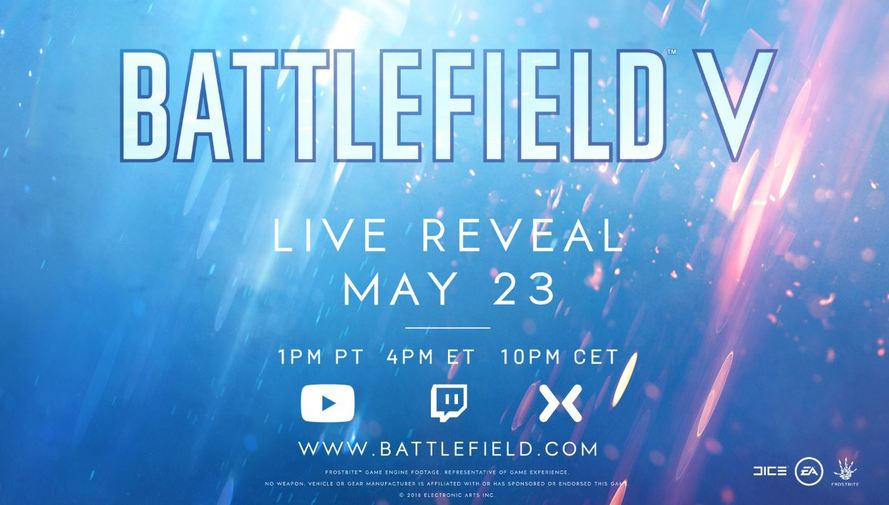 Battle Field 5 release is imminent and official. The game live video reveal as been slated for May, 2018. The video game series by EA Dice is to welcome the latest addition, Battle Field V whose live preview will go on air on May, 23 in the following time zones depending on your region: 1PM PT, 4PM ET, 10PM CET.

It is going to be an all out war saga game as expected. In the Live Reveal, the makers will share their views of the game with all fans of the video game viewing the reveal around the world. The reveal will be hosted by Trevor Noah and can be accessed and streamed live via Youtube, Battle’s field official website, Twitch and of course Mixer.com. Links of Live Streaming will be given in the bottom of the post.

Starting May 23, the BATTLEFIELD DICE TEAM alongside comedian Trevor Noah will showcase Battlefield V Live Reveal for everyone to see what the game is really like.

Below are the top ten(10) things to expect from Battlefield V:

Yes! Battlefield V will come as a brand new type of experience but still keeping all the features cool about the game. New challenges, missions and new theaters of war like never seen before. Get to fight in the battleground with another perspective.


The previous Battlefield 1 took us back to the era of World War 1. This new one comes with another settings yet unrevealed, left for players to see whats like. Either to give DICE team an applaud for a job well done or negative feedback. Until the live reveal, lets sit back and hope it is a thriller once more!.

#3. Big Reveal by the Makers


Yeah! Trevor Noah will be there. So also the developers and the DICE team to give you a thrill of what to come of the Battlefield V: OSKAR GABRIELSON, STOCKHOLM, ANDREAS MORELL, SENIOR PRODUCER, LARS GUSTAVSSON, CREATIVE DIRECTOR, AND DANIEL BERLIN, DESIGN DIRECTOR.


More multiplayers to the list. Multiplayers to cut across  various maps and modes which gives for a more thrilling Battlefield game play.


Battlefield have never failed to bring forth the next gen high gaming feel. Packed with immersive experience. Great sound, great environments, moments and of course great everything.

Trevoh Noah  a comedian and as well a Video Game optimist is here in the picture to present the live reveal of Battlefield V;  Trevor Noah opposed Trump’s claim of shooting games inciting gun violence in U.S.

Fans favorite war stories will be returning to the screen. Stay tuned for more info on this; a boost for both multiplayer and the single player mode preferences.


Yes! you get all of your answers to all questions already being spewed online and all speculation to expect and what not to expect of Battlefield V. All the answers to all of the questions will be answered in the live reveal slated for May 23 at 1 PM PT / 4 PM ET / 10 PM CET.

You can follow up with the Live Streaming on this links Given below:

Below are the 4 Places to Watch Battlefield Live Video Stream Reveal.