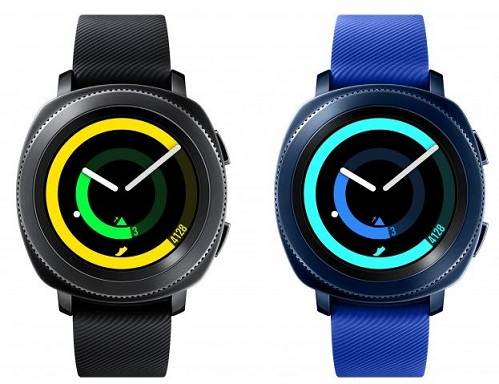 Samsung has now made official its new smart wears, Fit2 Pro, Gear Sport and IconX(2018). The trio were announced at IFA 2o17 alongside the likes of Smart TV sets. First in the list, is the Samsung Gear Sport which possess a Super Amoled display. Followed by Samsung Gear Fit2 Pro with MIL-STD-810G. And Samsung Gear IconX (2018) earbuds.

Samsung Gear Sport is driven by a Dual-Core 1.0GHz processor, sporting 768MB RAM. The built in storage is 4GB. The battery is 300mAh in capacity with wireless charging feature. Runs on the Tizen operating system with support for control over IoT enabled devices utilizing Bixby, Samsung Cloud, Samsung Pay etc.

Samsung Gear Sport has the name implies, is the newest sport focused wearables with particular support for swimming. The smart wearable is a unisex device 42mm in dimension. 1.2 inches in size and packs Super AMOLED 360p screen. The weight is 50g.

Connectivity options, include, Bluetooth, Wi-Fi, GPS and heart rate sensors. Since, the smartwatch is designed particularly to withstand swimming, it comes with 5ATM resistance, 50m depth of pressure and also the MIL-STD 810G ratings. at the front of the smartwatch, is covered with a Gorilla Glass 3 protection with a stainless steel casing. The device be used with salt water, sand, dust, UV, on pools and other uses.

The processor is a Dual-Core type with 1.0GHz clock speed. While the RAM is 512MB. The onboard storage is 4GB. The battery capacity is 200mAh. Supports WiFi, Bluetooth and GPS. 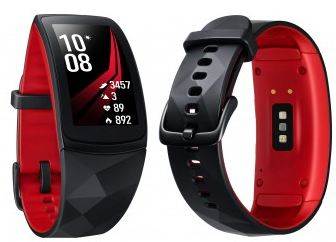 Samsung Gear Fit2 Pro comes with similar specs like the Fit2, but with an improvement in the water resistance and general ruggedness of the device. Like the Gear Sport, also can be used for swimming. It has 5ATM water resistance coupled with MIL STD-810G certification. The device can withstand shock, UV, sea water etc.

Coming down to the body design, the previous Fit2 with similar specs has the latter, sports 1.5 inches curved Super AMOLED display with 216pixels by 432 pixels resolution. The screen is reinforced with Gorilla 3 protection.

Samsung Gear Icon X(2018) is an accessory, a free supposedly free earbuds from Samsung offered when you opt for a product. The samsung Gear Icon X new earbud comes with more enhanced battery life. Which can take up to 4 hour of talktime and 5 hour of bluetooth music streaming. 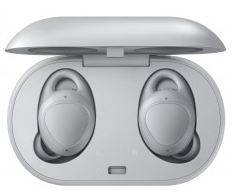 The two earbuds making one unit, both sport 4GB inbuilt storage each. With 82mAh capacity battery which supports quick charging. 10 minutes of charge can leave you with up to 1 hour of usage. The earbuds each weighs 8g.

Features of both earbuds include, a capacitive surface, single tapping, double tapping, triple tapping, hold, swipe up and swipe down.