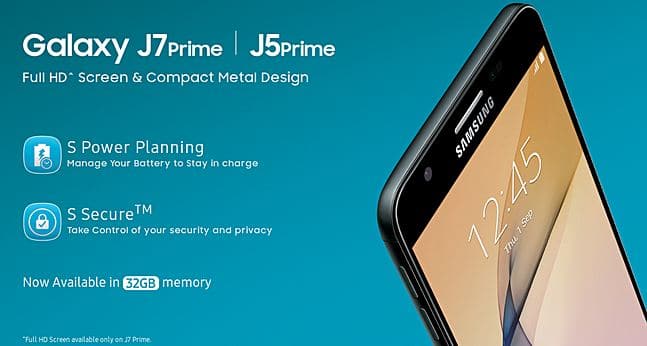 Samsung Galaxy J5 Prime and J7 Prime 32GB variants is now available in the Indian market, previously you can only get the 16GB variant. Both models are available in gold and black coloured variants.

The smartphone is also another variant of the Galaxy J7, J7 Next, J7 Pro, J7 Max.

As for the finish design. It is built with front glass, aluminum body and plastic ends. The sim is a nano dual sim type.

The smartphone has the availability for the radio head 3.5mm jack. It has wireless infrastructure of WLAN Wi-Fi 802.11 b/g/n, Wi-Fi Direct. It also has hotspot capability.

The smartphone also has the Bluetooth 4.1, A2DP, LE. GPS is also included for tracking locations. With the technology of,  A-GPS, GLONASS and BDS.

It also have Radio FM and with USB microUSB 2.0 and  USB On-The-Go.