There have been an going competition on number of tech gadgets from monster PCs with 18-core processors, VR headsets, eyeris scanner and more. Sandisk is set to announced at IFA in Berlin this week it high capacity 400GB microSD card.

I know you will be wonder by now ” 400GB memory card” Yes, it’s a memory card. As the smartphone company competion is heating up with phones with incredible specification of massive internal storage, this will give room new release phone to take this giant capacity microSD. 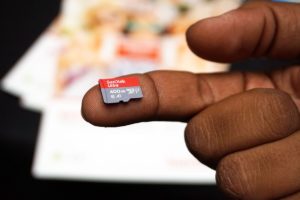 Fingernail-sized memory card with 400 friggin’ gigabytes of storage is mind bogling considering the size, that’s three times the amount of storage that comes with an entry-level MacBook Pro. If your head isn’t exploding thinking about how much stuff you can store in something this small, it should be.

The previous world’s largest microSD card maxed out at 256GB of storage, or about half the amount as this new record-breaking microSD card. It’s a gigantic leap in technology, especially when you consider the last storage record was set only two years ago.

However, it truly awesome how SanDisk was able to cram so much storage into such a small card chip. This most be a breakthrough in nanotechnology that made it possible, but I’m more fascinated with just how much data it can store. 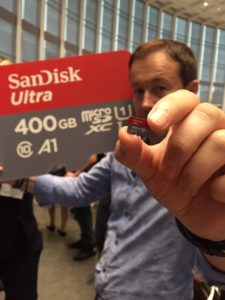 Let me analize the a couple of things that is incredible 400GB memory can hold. I will surely need i calculator for this:

That doesn’t seem like a lot at first, but it is compared to a commonly used 32GB memory card, which can hold 16,000 photos and 8,000 songs and 7 Full HD iTunes movies.

If you are considering the size, you can store more than you’ll probably ever need. This thing can hold a gazillion hours of 4K video. And it paves the way for even higher resolution 8K videos to be carried around with ease.

Leave you comment, let Know how you feel about the Giant Memory card.