Mixed Reality and how it really differ from the AR and VR.

This article is all about the differences between AR and VR technology shown with examples. Without further ado, let’s see what AR’s and VR’s are all about.

Virtual and Augmented Reality has been in the spotlight for a while now, but there’s a new kid on the block that’s been getting a lot of attention recently from industry insiders, market analysts and tech enthusiasts alike.

Mixed reality is used as an independent concept or to classify the spectrum of reality technologies, as referenced in the reality–virtuality continuum.

As an independent concept, the Mixed reality is the result of blending the physical world with the digital world.

Mixed reality is the next evolution in human, computer, and environment interaction and unlocks possibilities that before now were restricted to our imaginations.

It is made possible by advancements in computer vision, graphical processing power, display technology, and input systems.

However, this technology was not really new at all, having been defined back in the early nineties by University of Toronto Professor Paul Milgram and Artificial Intelligence (AI) researcher Fumio Kishino as lying anywhere within the extremities of the ‘virtuality continuum’in their paper in 1994 “A Taxonomy of Mixed Reality Visual Displays“.

Their paper introduced the concept of the virtuality continuum and focused on how the categorization of taxonomy applied to displays. Since then, the application of mixed reality goes beyond displays but also includes environmental input, spatial sound, and location.

That being said, it is only now that the technology has matured enough for tech companies to contemplate bringing MR devices to the market, with Microsoft taking an early lead with its HoloLens headset, but more on that later.

What exactly is Virtual Reality and how is it different from its two spiritual cousins – AR and MR? Virtual reality (VR), which can be referred to as immersive multimedia or computer-simulated reality, replicates an environment that simulates a physical presence in places in the real world or an imagined world, allowing the user to interact in that world (Wikipedia view).

Or simply Virtual Reality is a technology that uses computer-generated imagery to create a realistic virtual environment which can be experienced and interacted with by people in the real world in a way that makes them feel they are actually a part of the virtual setup.

Typically, VR required specialized equipment to experience virtual reality, and once properly setup, you’ll be able to look around the software-generated artificial world, move about in it and interact with the virtual elements as if you’re actually a part of the virtual world yourself.

Virtual Reality has long been promoted as the next big thing in consumer tech, but it has so far failed to capture the imagination of mainstream consumers the way smartphones have over the past decade.

VR, however, has found many a taker within the tech community, with giant multinationals like Facebook, Sony and HTC already heavily invested in the new technology with devices like the Oculus Rift, PlayStation VRand HTC Vive respectively.

Even Google’s Daydream VR platform has seen an uptick in recent times, and we’re expecting more OEMs to support the platform in the days to come.

Augmented Reality (AR) places digital content on top of the physical world you see around you.

AR works by adding 2D or 3D layered content on top of real world objects or locations, allowing the user to unlock additional information that may be relevant, therefore turning the physical world around them into digital media. 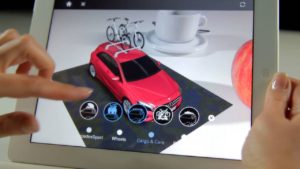 Some things you can currently do within an AR experience:

In fact, to be perfectly honest, they are not even entirely different technologies in the strictest sense of the term.

To explain the difference between Augmented and Mixed Reality, we should take a closer look at how MR was defined by Milgram and Kishino some years ago.

According to them, MR lies “anywhere between the extrema of the Virtuality Continuum”. While that sounds like a lot of unnecessary tech-jargon at first glance, virtuality continuum is really a concept that describes the continuous scale ranging between the completely virtual (as in Virtual Reality) to the completely real (as in real life).

In essence, what it really means is that Mixed Reality encompasses everything from Augmented Reality to Augmented Virtuality, which are at the two extremities of the technology.

In theory, both are actually subsets of Mixed Reality, insofar as both these technologies juxtapose the real and the virtual worlds with one another.

Where they do differ, however, is where they lie on the aforementioned virtuality continuum scale.

As its name suggests, Augmented Reality is at one end of the Mixed Reality spectrum and includes more of ‘reality’ than ‘virtuality’, whereas ‘Augmented Virtuality’ is basically the virtual world that’s been ‘augmented’, or enhanced, by the addition of a few real-world objects.

Having said that, different companies are using the term Mixed Reality to mean slightly different things and as things stand now, a standard definition is hard to come by.

Like its more well-known counterparts, Mixed Reality is also expected to be pitched as a gaming platform in its early days.

However, it would be a mistake to dismiss MR as just a gaming platform, because the technology has already been incorporated into different applications in a wide variety of industries, including, but not limited to, arts, entertainment, manufacturing, healthcare, aviation, and education.

Mixed Reality is also being tested by the military establishments of various nations for combat training, so it’s safe to say that there are enough possible use cases for the technology.

Mixed Reality is also expected to be pitched as a gaming platform in its early days.

However, it would be a mistake to dismiss MR as just a gaming platform, because the technology has already been incorporated into different applications in a wide variety of industries, including, but not limited to, arts, entertainment, manufacturing, healthcare, and aviation.

Read also:  Looking for a Job?: Get one via Facebook Job Section Feature

Communication: Holoportation will allow device users in different cities or countries to sit and interact with each other in the same space virtually while remaining miles and miles apart. 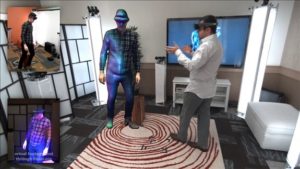 Education: Below is an example created by Project Esper displaying how medical students will benefit and gain more comprehensive views and interactions with the human anatomy. 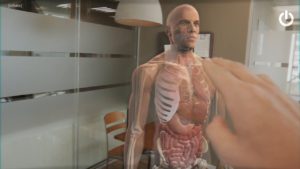 Entertainment: Microsoft Hololens is already working with the NFL to completely change the way fans can watch and interact with players, other fans, real-time game experiences and its advertisers and sponsors. 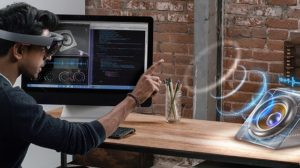 Military: Mixed Reality is also being tested by the military establishments of various nations for combat training, so it’s safe to say that there are enough possible use cases for the technology. 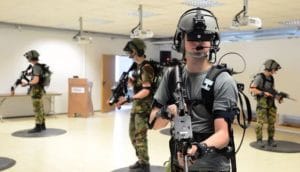 Upcoming MR Devices and When Can We Expect Them

If you want to take Mixed Reality for a spin but feel that the HoloLens is way out of your league because of those exorbitant price-tags, you’ll be pleased to know that a plethora of reputable tech companies from around the world are working on bringing their own MR devices based on the Windows Mixed Reality platform, at considerably more affordable prices than what’s being charged by Microsoft. 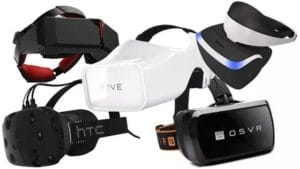 As mentioned earlier, Microsoft is taking the lead in bringing Mixed Reality to the fore (Pre-order your Windows Mixed Reality dev kit).

The company has already demoed a NASA simulation of walking on the surface of Mars with the help of its HoloLens Head Mounted Display (HMD), which is based on its own MR platform, Windows Mixed Reality, that’s part of the Windows 10 Fall Creators Update.

There’s also a Commercial Suite with enterprise features, such as Bitlocker Security, and that one sells for $5,000. 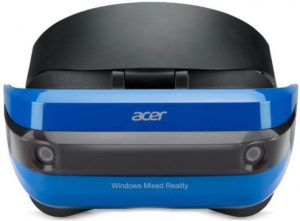 Asus, Dell, Acer, HP and Lenovo are just some of the big names that are working on bringing their own MR headsets to the market in the months ahead.

While not all these companies have announced the pricing of their upcoming headsets, Acer and HP’s offerings are priced at $299 and $329 respectively.

It’s difficult to say at this stage whether Microsoft is subsidizing the cost for Acer and HP to popularize its MR platform, but at these prices, the two devices are significantly more affordable than the VR headsets from Oculus, Sony and HTC. 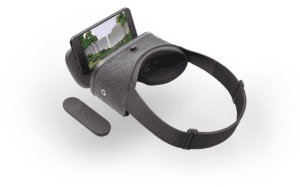 However, if even $300 seems a bit on the higher side, a startup called Zapper has you covered.

The device was originally launched on Kickstarter where it raised over $84,000, and is currently available for pre-order on the company’s own website for just $30. 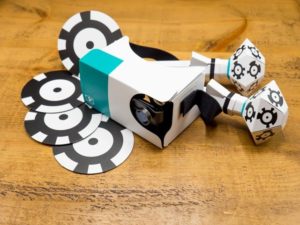 There’s no word on when you’ll get your ZapBox if you pre-order now, but the developer editions of Acer and HP’s devices are expected to start shipping next month.

The final consumer units, however, will apparently only become available for purchase at the end of the year.

Even as Microsoft is taking the lead in promoting Mixed Reality, it is certainly not the only company burning the midnight oil on the technology.

A Florida-based startup called Magic Leap is also reportedly working on a head-mounted virtual retinal display that has been kept under the wraps until now but is rumored to be made official at some stage going forward.

While it’s difficult to say anything for certain about Magic Leap’s upcoming product(s) in the absence of any concrete information, the company must be doing something right, given that they’ve raised over $540 million in venture capital from the likes of Google, Qualcomm and Kleiner Perkins Caufield & Byers.

It’s clear from these specs that Microsoft is favoring a mixed reality experience that can be used with a non-gaming laptop. Smart plan, as this opens it up to a lot of people who don’t have a desktop PC.

A lot of newer, mid-range Ultrabooks not commonly associated with gaming are sporting these specs, and one of the only problems we can see is the HDMI port that seems to be disappearing from a lot of the thinner laptops out there.

As far as building a PC to run Windows Mixed Reality, you should be able to get away with spending somewhere around $500.

Mixed Reality: The Best Of Virtual and Augmented Reality

As its name implies, Mixed Reality brings the best of Virtual and Augmented Reality by combining motion-sensors, advanced optics and cutting-edge software.

If it can deliver even a fraction of what it’s promising, it will open up a whole new world of possibilities by bringing apps, games and interactions that we’re yet to experience until now.

It may be late to the party, but with prices expected to be at relatively more affordable levels than VR devices, Mixed Reality may very well cross over to the mainstream one day, but for that, we’ll have to wait some more to see if the technology can actually provide something that can transcend the gaming niche and appeal to a broader audience.

lastly, i will like to give due credit to my mentor when it comes tech niche: Kishalaya Kundu.

Thank you for reading if you have any questions or thoughts, do let us know in the comments section below. We love hearing from you.