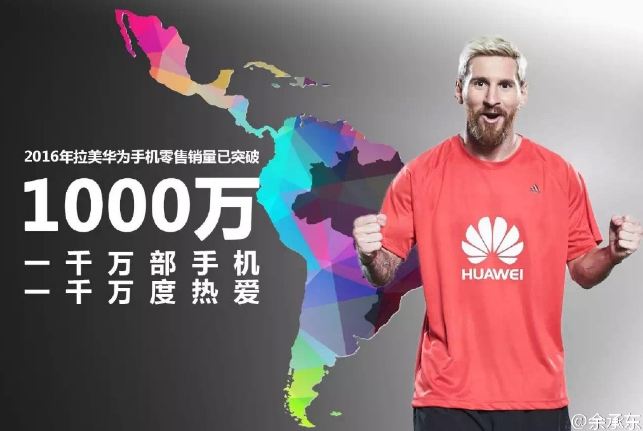 Huawei Smart phone set record breaking 10 million sales in 2016.
Huawei company Senior Vice President Yu Chengdong on a public note revealed that the smartphone sales in Latin America had exceeded 10 million. The news came after Huawei P9 smartphone was estimated to have made over 9 million sales across the globe.

Yu Chengdon shared a banner  with the 10 million caption that pictured popular footballer, Barcelona front man, Lionel Messi. Huawei had earlier announced that it will unveil around 1,500 new retail stores in the region coming 2017. What this means is that, the Chinese company are ready to increase their presence in South America.

Huawei have continued to be impressive over the years with several top notch releases that have awed users and exceeded expectations.

Smartphones, like the Huawei P30 is a good example. The smartphone literally dominated its contemporaries when it was unveiled, in almost all the category you might have imagined.

It dominated in the performance, camera department, design and battery drain. A close contender when the Huawei P30 was unveiled were the likes of OnePlus 7.

Huawei from all of its achievements of recent clearly deserves to be in the list of the top 5 smartphone brands.

The OEM has also been great in terms of the accessories, making of internet devices like, modem and routers. Wearables, headsets, home appliances and robotics.

Of recent the company has been the frontier of the 5G network system and implementation. We have seen 5G already installed by the company in some European countries, like England. And we have also seen the company launched one of the pioneer of 5G smartphone in the smartphone niche.

Overall the company is sporadically setting new strides and achievements. Which overall is a good thing for the Chinese economy. Though, of recent the company has had a power tussel with US, and a possible ban of the company in US is eminent.

While some critics argued that the cause of the this, is said to be, because of 5G.