Image Source: weibo.  Hauwei P10 Specification glimpse from GFX Benchmarking.
Hauwei are known for their beastly tech specs they inculcate into their devices, the Hauwei P9 hasn’t been an exception. The Hauwei P9 can boast of been one of the best smartphones of 2016. The P9 has been a major hit and sales ever since it’s release has plumeted to great extents. Now, the market ain’t done with the P9 already and Hauwei P10 is already on it’s way into reality, following leaks here and there from various online sources.

We should expect the Hauwei P10 soon, but before that happens lets have a glimpse from GFX Benchmarking of what the specs should entail: 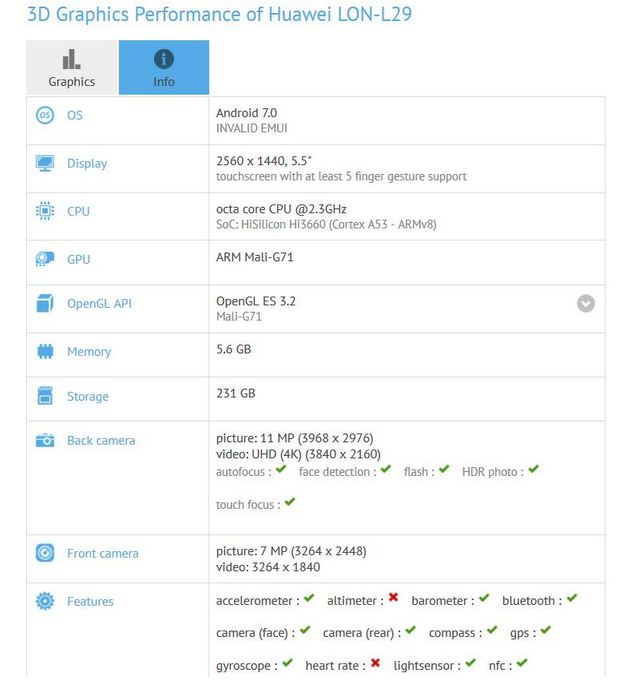 Hauwei P10 will definitely run on Android 7.0 Nougat latest Os in the android series. Hauwei P10 may house a 12 MP camera on the back capable of taking 4K videos also should come alongside other features like self-autofocus, HDR, face detection and aperture. Huawei may continue with the Leica dual lens setup on their flagship smartphones. The front camera for selfies and chat should boast of  8MP spec.

Huawei will have no reason to hurry up with the release of the P10 into market. The Hauwei P10 is most likely to be released next year, 2017. Precisely, April. This will welcome the forthcoming of its next model series.

Looking at the GFX Bench image again, “3D Graphics Performance of the Hauwei LON L29”, the results technically confirms that the specs is for the Hauwei P10 since we already know that the Hauwei P9 model is tagged LON-L19.