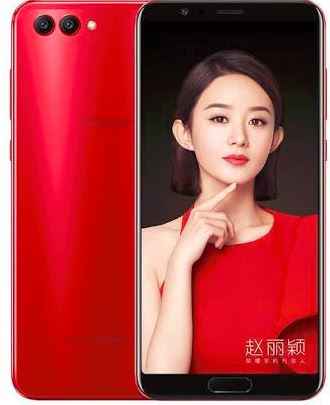 Huawei Honor V10 is now official, the smartphone was released after the flagship Mate 10 and Mate 10 Pro. With specifications and design aesthetics that can easily be differentiated from the Mate 10’s design. The Honor V10 houses a bezel-less design with fingerprint touch identification system at the front of the smartphone.

In terms of Specification and design, the Honor V10 is similar in specs with the Huawei Mate 10 Pro, but the Mate 10 Pro is a more powerful device. Huawei V10 brings you what you would get in the Mate 10 Pro at a more cheaper price for less money. The device is covered with an Aluminium frame finished in an elegant eye catchy design. With front and back also reinforced with glass to make the device sturdy and durable.

Huawei Honor V10 is 7mm in thickness and weighs 172g. Considering this design, the device is light in weight with a touch of sophistication when being held. Huawei V10 smartphone comes in Aurora Blue, Charm Red, Night Black and Beach Gold coloured variant.

Honor V10 sports a bezel-less design display. Sporting a 6 inches IPS LCD capacitive touchscreen display. For multimedia and video lovers, it a charming and captivating experience using the Honor V10 screen to watch stuffs. The Home button of the V10 also houses the touch identification system for fast unlocking of the device. The screen display resolution of the Huawei Honor V10 is 1080 pixels by 2160 pixels with pixel density of 403ppi. With screen to body ratio measuring 78.6 percent.

In terms of Hardware, Huawei Honor V10 is built with a HiSilicon Kirin 970 chipset with clock frequency measuring 2.4GHz Cortex A73 Octa-Core Processor. As for the onboard GPU, is a Mali-G72 MP12 type with 6GB RAM with also a 4GB RAM variant to choose for a less price tag. The onboard storage comes in 64GB or 128GB all depending on the price tag you are willing to get it. There is also option for an expansible storage by using microSD card set at a maximum limit of 256GB. Huawei Honor V10 runs on the Android 8.0 OREO operating system with the Skin being the EMUI 8.0.

Huawei Honor V10 is built with a dual rear camera setup mounted at the back of the device. The picture taken or video is crystal clear and clean like never seen before. The rear camera combos measures: 16MP with f/1.8 aperture and 20MP units. They both come with phase detection, Geo-tagging, Touch Focus, Led Flash, Face/Smile Detection, HD, Panorama. The camera can also record videos at 2160 pixels @30fps 4k. The front selfie camera is 13MP with f/2.0 aperture.

Huawei Honor V10 battery capacity is 3750mAh with a 4.5V @5A fast charger. This make the charging process like a breeze. The battery is a non-removable type. With 30 minutes of charging from no-charge state, you get about 50 percent of the battery’s capacity.