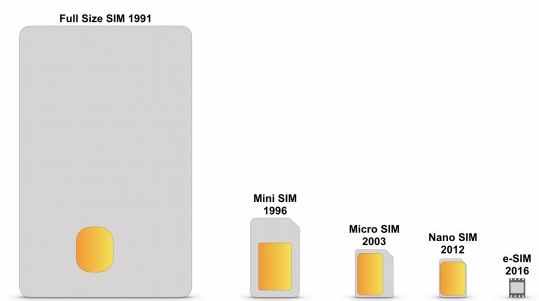 With the release of the Apple Watch Series 3 and Google Pixel XL, Google and Apple made the eSIM to become popular by including it into their flagship devices.  The eSIM tech will offer a better design aesthetics for smartphones manufacturing companies as well as provide a more improved and better experience for users.

Your SIM cards, or Subscriber Identity Module is an electronic chip inside of a card which serves as a storage space for subscribers information, network data and other functionalities. With SIM cards, one can easily identify users of a particular network.

SIM cards have significantly being faced with a gradual decrease in it’s size over the years. In the past, SIM cards were as big as VISA cards and now we have their sizes trimmed down to fit into simplistic design styles of recent smartphones. The implementation of the eSIM into Google Pixel 2, Pixel 2 XL and Apple Watch Series is one such step of many.

What’s trending now in the tech space, you would agree with me, aims to make devices become smaller and more efficient. In the smartphone niche, we have seen the likes of, complete overhaul of the headphone jack with earbuds, as in iPhone 7. More efficient Snapdragon chipsets manufactured from nm process, as in Samsung Galaxy S8 and the list goes on and on.

The Nano SIM card is small in size, with dimension of 12.3mm in length and 8.8mm wide. Yet, designers still seek to have a smaller variant which can accommodate less space in order to achieve a more compact design with internal electronic circuits embedded at close range. These will ensure to produce devices which can withstand shatter, water and other environmental conditions.

The eSIM has come to stay, since, it has already being embraced by the tech giants, Apple and Google.  A clearer look into eSIM:

It is embedded into a motherboard during manufacturing process and performs same function as any other type of removable SIM. eSIM, is now a GSMA standard with M2M (Machine to Machine) capabilities. It is only a matter of time before we see the eSIM adopted into other popular brands, like Samsung.

Since eSIM is built with Remote Provisioning Capabilities, choosing between network operators got even more easier as you don’t need to swap SIMs as you would normally do using smartphones with other SIM standards(micro, Nano etc). This will provide ease to choose between selection of networks operators with subscription plans that fit into ones budget. Overall, it creates more satisfaction for the end users.

Say you moved to another location, the eSIM can detect whether you are in a new location and thus, offer you the ability to switch to a network operator plan in that location. This is something the eSIM is capable of doing but, has to be accepted by network operators before its implementation. Application like this are one of many, that, it is only a matter of time, before it gets fully embraced. Like all other innovations in the past, it has to be gradual and evolve bit after bit.

The eSIM isn’t excluded in the IoT(Internet of Things) future happenings. Such that, every device will be connected to the internet. Your home, Pen, Car, Laptops, Wearables, Smartphones, Office etc. eSIM implemented into laptops, will create an opportunity for operators and retailers of data bundles to sell even more data.

In Google Pixel 2-(XL), the eSIM has been implemented as the Google Project Fi, but, also comes with a removable nano-SIM tray where you can swap and insert nano-SIMs of various network operators. As said earlier, it is only a matter of time, before the eSIM becomes a standard for adoption by network operators, say the next 15 years or even nearer.