Elephone P8 is expected to sport an Helio P25 chipset, just as we have seen in the recently announced Xiaomi P2 .

In addition, the smartphone has been purported to and possibly to arrive with a Deca-Core processor setup.

Though MTK chipset offer quite some value for money. But, critics have argued that the chipset when compared to its Snapdragon counterpart lags in terms of power optimization of smartphone batteries.

But, the Helio P25 chipset is an improved chip. And we have seen in several other releases this year. Many OEMs are already adopting the MTK chipset in some of their device variants.

The likes of Vivo, Xiaomi, Oppo and Umidigi comes to mind. These OEMs have been able to produce quite a number of decent MTK devices that do very well and as well Snap devices also.

Year in year out MTK chipset are being improved on to compete with other chipset, like the Samsung‘s Exynos and Huawei’s Kirin chip.

The Elephone P8 will be a flagship type or at least the most specs packed smartphone of Elephone for 2017 release.

This means the device can go head in head with the likes of the Huawei P20 and a few others.

It will also sport a big RAM to work hand in hand with the P25 MTK chipset. Both working together will help as a big performance boost. 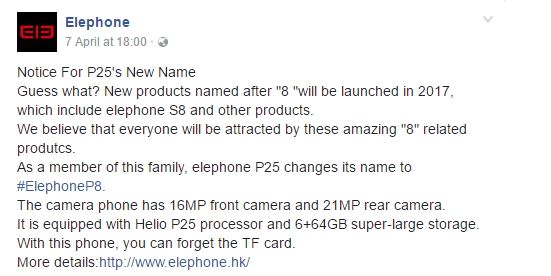 What we know from the image: The device will sport the Helio P25 chipset coupled with 6GB of RAM and 64GB of on-board storage expandable via microsD card. 21MP of rear camera setup and 16MP front selfie camera.