The Android OREO Go Lite weight version of Android 8.1 OREO operating system is now live and can be implemented on devices built with small pack of specs. Not everyone can afford a beastly phone for the price and not everyone may also want a phone with beastly specs even when their is money to buy.  Some people just require more of simplicity, thus, we get a light weight operating system that fits perfectly for low end device with mid specs. OK!, let’s delve into a slight detail: 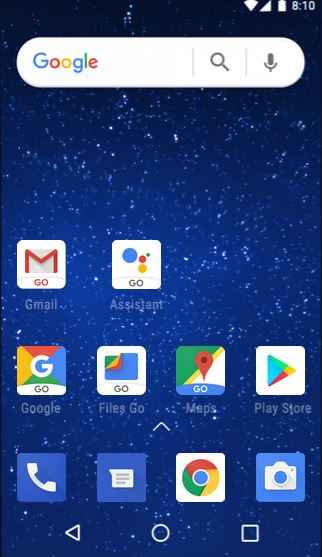 Since the apps that comes factory default with the Android OREO operating system is all light weight and built with the light weight features considered during the development, you get to save more storage on the onboard storage allocated to your device. With built in functionalities which helps you have more control how your storage is being used and what space is taken.

In Addition, the Android OREO Go Edition apps eats less storage space, since, it’s built to save up to 50 percent of the storage space it would normally take on an Android Nougat 7 operating system. You also get a performance boost for which ever device the OREO Go Edition works on.

That’s just the tip of the iceberg, Android OREO Go Edition, also comes with built in File Managing application, called Files Go. Files Go is created with the intent to help people quickly trim down and locate files that aren’t useful and take up a significant storage space. With just a hit of a button, yo get to free up more space on your storage memory.

With the new re-imagined Google Apps inside of the Android OREO Go Edition you get a smooth experience with quick pacy feel which makes everything seem faster. In the actual sense, it is indeed fast. In addition, you get Google Go feature, which brings all of the popular web networks at the front of your device, especially for newbies that don’t need stress over knowing web sites names.

Gboard is also there, to bring you all of your keyboards needs. Comes in many languages to choose from.

When you turn the data savings feature on, you don’t need stress, this features runs in the background and takes care of every other thing to help conserve your data. Particularly useful for people with metered internet network.

With the built in Chrome application for browsing the internet, also comes with it’s own data saving feature, when turned on, you save about 60 percent of your internet data when connecting to web pages.

Android Go Edition is also built with security in mind, With the Google Play Protect, the Android Go Edition for low end smartphones can now boast of the same security feature you would get in using the standard Android OREO operating system.

The mobile security features works even in offline mode, helps scans all of your files, checks your WiFi networks. In addition, when your device is stolen, you can track it down, put a passcode inside of it, clean everything inside of it by signing into your Google Account.

Also work with App Developers to help bring optimized apps with light weight feature which is geared to give a seamless experience when using devices running on the Android operating system.

SoCs like, MEDIATEK, have collaborated to implement the OREO Go Edition, particularly the MediaTek MT6739, MT6737 and MT6580 chipset that now have support packages to implement the OREO Go on devices. Since, this chipsets mentioned are entry level chipset, cheap and affordable, marks the first time you would get a standard operating system like the Android OREO Go Edition running on these boards.

For me that’s a good development especially for the lower end devices, at least can have a feel of the Android Operating system. And again, we greatly increase the OS in the smartphone market, that is more popularity for the guys at Google.  More like Google are trying to BLACKHOLE the mobile operating system space.