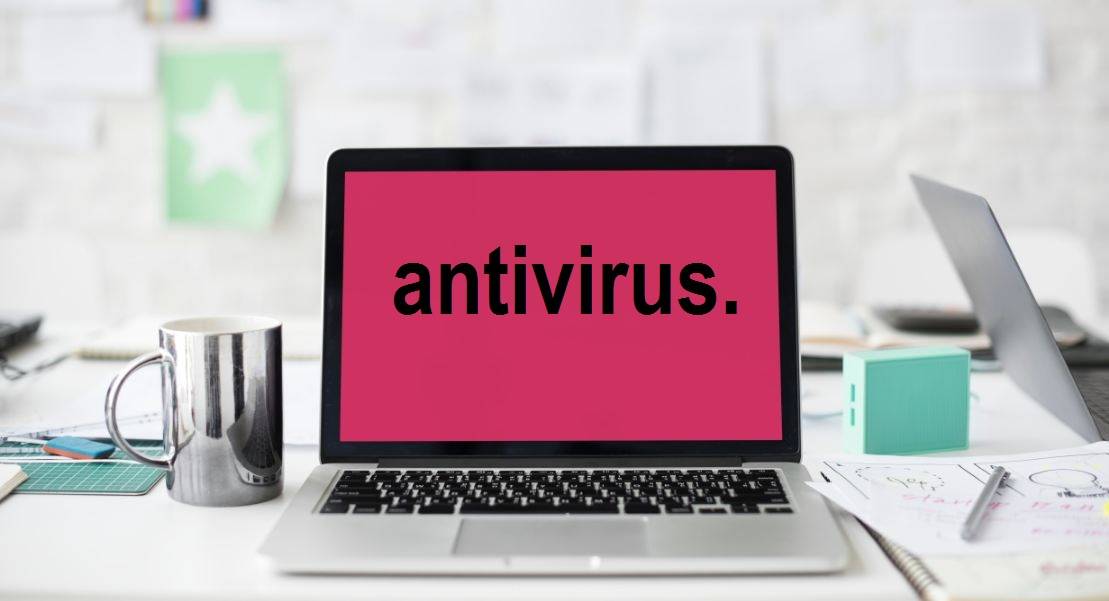 In this post, we would show you guys how to get 11 Kickass Free Antivirus PC 2019 Download. We would be looking at the likes of Baidu antivirus, Qihoo 360 Total Security, Panda and more.

We would also cover the ones that also come already in PC, like, Windows Defender and Microsoft Security Essential.

Both antivirus and others that would be listed. All comes fully packaged with resources to protect your PC against computer worms, viruses, malwares and trojans without spending a dime.

Some of the antivirus in the list even boast of protecting devices from malicious websites and also offer cloud protection when surfing web pages on the internet. For example, even Windows Defender in Windows 10, now offers Cloud Protection Services too.

Why use an Antivirus:

These 11 antivirus software are really cool. They will get the job done when you need something to at least protect your PC from malicious virus that may reside in a friends pen drive or external storage when these devices are used on your PC for varying purposes.

Another reason why at least you should have some sort of guard for your PC is when you find yourself installing random application.

Some of these applications may come alongside an extra malicious program with the sole intent to infect your PC . Most probably in the form of botnets for a future denial of service attack(ddos).

If your computer becomes a botnet, it will participate in tasks instructed to it by the attacker without you even you noticing it. Millions of infected computers serving as botnets may conglomerate to attack a website or do other illegal stuff without the awareness of the owner.

They may also come in the form of viruses that stretches your computer resources or corrupts the entire operating system or even completely ruins your important files like documents, pictures and videos.

Therefore, the need to protect your PC from these malicious programs becomes pertinent on the Windows Operating System with larger market size unlike LINUX.

Get Some Antivirus Guard for your PC:

To get some gaurd for your PC becomes essential not a luxury lest you will keep your PC in solitary confinement, I guess not. You either purchase one for your PC or use this free ones which have proven to be very effective so far.

I use Windows Defender or Microsoft Security Essential on PC and both are similar in some ways and are very effective.

Without any hesitation again, lets quickly look at the 11 antivirus software, you can choose for your PC. In order to protect against any malicious file or application from within your computer or from the web.

The antivirus that would be listed are free to use. Though, some in the list, may be upgraded to premium account, in order to enjoy specific benefit or feature. Other than that, they all free to use and trial.

So lets begin with the listing:

Below are the 11 anitivirus software you can install and try out on your PC for completely free. These antivirus softwares has been tested and so far they work very fine.

Baidu Antivirus is an award winning antivirus from one of the largest Chinese Tech company.

The good news it’s completely free, download straight up to your device and let Baidu take over with what it knows how to do best.

Imagine them as Google of China, that’s to show how Baidu is relevant in China’s tech software industry.

Baidu antivirus has also received recognition from other company around the World.

Have you used Baidu Browser before? It comes in lots of features, Check this LINK. 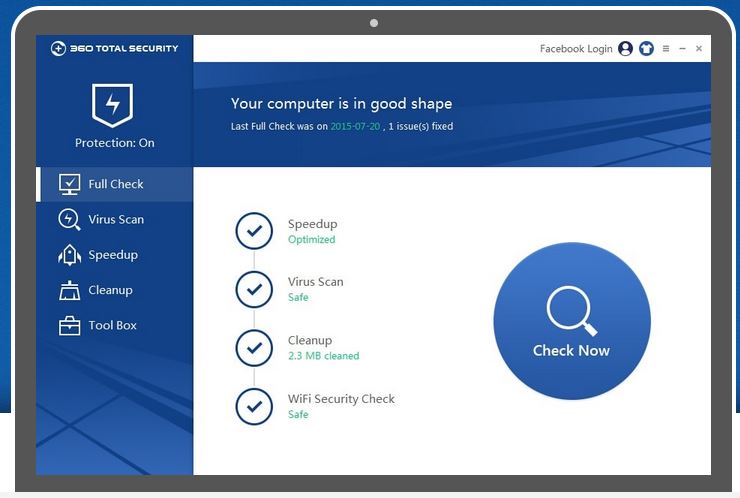 Its easy to use and the user interface is simple and straight to the point. It also boast of over 5 million users world wide.

Panda does what is expected of an antivirus. But this time, also offer protection while you go about your stuff on the web.

Panda is free, and you can also step the game by dishing out some few coins to subscribe for some extra features from their site.

They even boast as been the free best antivirus you can think of. This time it’s not China again, it’s American or something close to that.

Panda also boast of being the lightest antivirus protection you can obtain completely free on your PC.

What I mean by lightest, it doesn’t stretch up your computer resources and the file size is small compared to other antivirus application, thus suitable

for low spec PC’s. Get Panda from:

Microsoft Security Essential and Windows Defender are the same. Both come from the same mother, Microsoft Windows. The only difference is on the Windows PC they are both used.

Windows Defender comes as default antivirus for Windows 8, 8.1 and 10. All you need to get Windows Defender working on Windows 10 is to update it often on the internet, which can be easily done with just a push of the button. And bam!, your PC is protected from malicious programs, examples short cut antivirus and other notorious trojan horses. 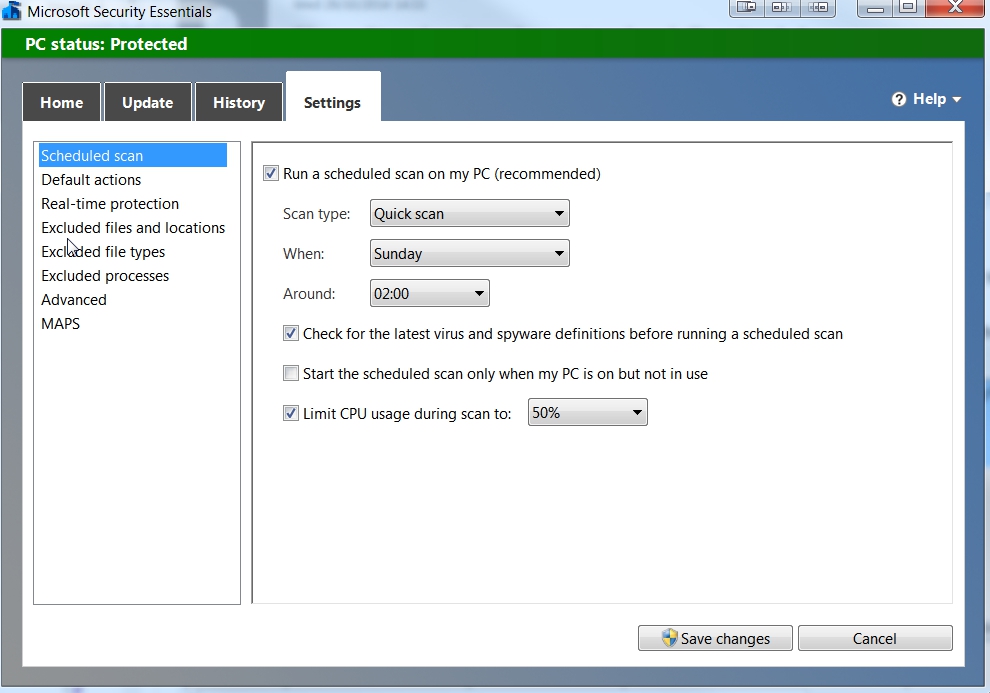 You also have to update it after installation from the internet to harness it’s full features.

For any one using either Microsoft Security Essential on Windows Vista or Windows 7 and also Windows Defender on Windows 8 and 8.1.

These settings in the image below is very important to also reinforce the security against malicious programs from flash drives you insert on your PC.

To make set it up, open Microsoft Security Essential or Windows Defender.

Go to Settings>>Advanced. Then tick all the option as seen in the image below, especial the Scan Removal Drive option. 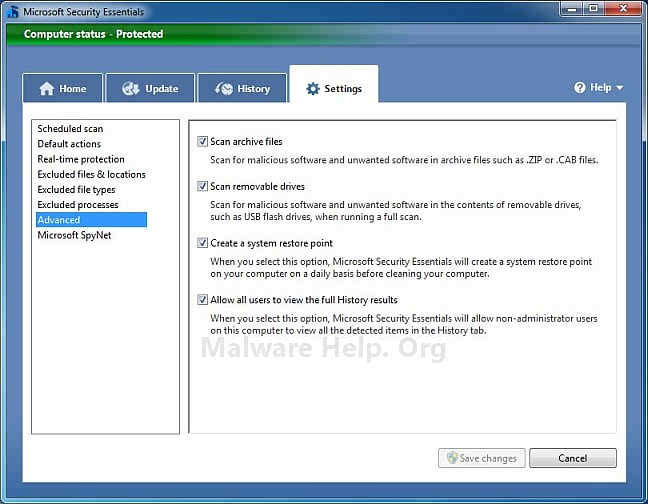 Bitdefender Antivirus is also a free antivirus that does a good job on your PC. The antivirus is created by Romanian web security firm centered on programming and computing.

With Bitdefender Antivirus, installed on your PC. Users get protection from trojans, spywares, worms, rootkits, adware and spam contents.

Phishing links, Malware from the web and other non-suspicious adware on websites, that may pose as a threat to the users.

To download Bitdefender antivirus and try on your PC. Use the link, give below:

AVG Antivirus, is one of the most oldest and popular antivirus software in the internet.

The antivirus, has been existence for quite some time. Offering protection on PC for users against Viruses, ransomware, adware and malware.

To install AVG Antivirus, is very straight to the point. Just use the url below.

Download the Antivirus and install to your PC and do a quick scan.

You can also update the Antivirus timely, in order to fetch new security patches for the antivirus.

If you are looking for a Free Antivirus software, then AVG is worth given a try today.

To download AVG antivirus software to your PC. Use the link given below:

Kaspersky is also an old antivirus software that has been in existence, when the internet world wide web went viral.

The antivirus software has emerged to offer better protection over the years for users.

Normally, this is done by the company by timely improvements made on the antivirus.

The antivirus, is created by Kaspersky Lab Internet Security. With Kaspersky, users can confidently rely on the antivirus, to protect against, trojans and malwares.

Some features, you get with Kaspersky, are parental controls, spam detection, Phishing  protection and firewall settings.

Though, Kaspersky is free to download and try. However, it comes with a 30 day free trial.

To try out Kasperksy antivirus, download from the link given below.

With also premium features that can be accessed when upgraded to a paid version.

Avast is free to download and try. But, like Kaspersky and AVG, comes with a paid version to get premium features.

Some notable things you find in the menu of AVAST are, Home Network settings, Updater, Game Mode and Browser Cleanup.

Avira Antivirus is also free to install and try on your PC. The antivirus dates back to 1986.

Therefore, also falls in the list of oldest antivirus to be created.

Avira antivirus, helps protect your PC from against infected PC programs. Theses infected programs, may be malwares, viruses, trojans and even adwares.

Or even a botnet program, that may be taking much of your PC resources without your knowing. Avira helps protect against all such programs.

Avira antivirus comes with some cool options in the menu. Easily accessible by users, like, Cloud Security, VPN, Malware  and Ransomeware protection.

To download Avira, antivirus for your compute, simply use the link below:

Quick Heal antivirus is one very effective Antivirus for PC that helps protects against all kinds of viruses.

First, the antivirus, software is very small in size. But again offers incredible protection for your computer.

Quick heal scans every portion of the drive and ensures the virus has been removed. Without having to delete the file, document, music, picture etc that was affected.

This feature alone, has saved so many users from loosing vital resources from their external hard drives.

So with this feature, you can easily plug all kinds of external memory stick to your PC without being afraid that your PC would get infected.

By some weird viruses lurking around searching for PC to infect.

Secondly, Quick Heal offer order features too. But, to fully utilize the potential, you will have to upgrade to the full version.

But, if you are not yet ready to buy it. Then you can still stick with the free version. Which also does everything you will ever want it to do.

Download Quick Heal Antivirus from the link given below:

Norton antivirus is also one of the oldest antivirus software out there. It helps to shield against the likes of ransomware, viruses, malwares and other cyber threats.

Norton antivirus is completely free to install and use. Though, comes with a 30 day trial period. Which then lets users to subscribe for a plan that best suits their need.

You can download Norton antivirus software for PC via the link given below:

Though, some of the antivirus listed are free for 30 day period. But, you also get free lifetime antivirus too among the listing.

Which offer an incredible protection for your PC. Just as you would expect of the premium package.

If any Free Antivirus software for PC you love using. And happened not to be included in this listing.

Please, indicate it in the comment section below. Maybe it might be useful to some users. And we all can also give it a try. And see what’s like.