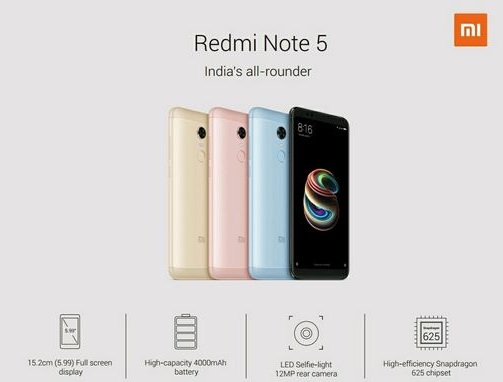 Xiaomi Redmi Note 5 going live in India market for its eventual 2018 unveil. The smartphone is an iteration of the 2017 redmi 5 plus which earlier came with a Snap625 chip, 6 inches and the MIUI android custome Android OS. The unveil will also go alongside the Note 5 Pro, both piece to stun users with an immersive feel for the money. We already know the Redmi lineup provides decent quality for money. The two releases aren’t an exception either.

So what you get when you order for redmi Note 5; you get an almost 6 inches Full HD display piece with a long lasting battery of 4000mAh, comes alongside fast charger  @5V/2A with USB 2.0 feature. 12MP rear camera unit and a Snapdragon 625 chipset, which is power efficient. What this means: you get performance and aswell a long lasting battery.

As for gamers and those intending to use the Xiaomi redmi Note 5 for high demanding task, it comes with a 2.0GHz Octa-Core Qualcomm Snap625 chipset. The onboard video memory is the Adreno 506, which handles all of graphics demands. 3GB onboard RAM with 32GB inbuilt storage or an option for 4GB RAM and 64GB Storage depending on how much you willing to let out of the cart.

The rear camera is 12MP with 1.2um pixel with f/2.2 aperture. The fron camera is 5MP with LED selfie light and beautify 3.0 feature inside. 1080p @30fps video recording ability.

The smartphone will go on stores like Gearbest, Geekbuying, Flipkart, Aliexpress for around 200USD+