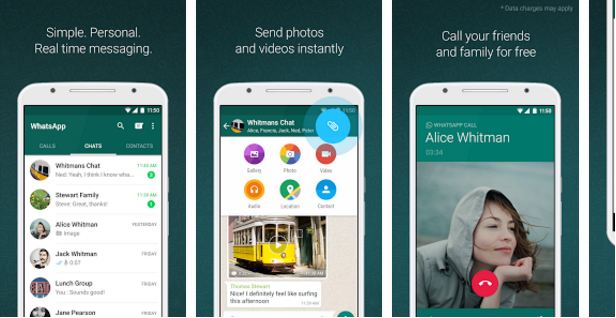 Whatsapp now lets you Video Call and Send Animated Gif images.
A close look at official Whatsapp Android Market place, Google Playstore. Shows that an update has been made recently on Whatsapp for Video call and GIF imaging support.

This means you simply need to update your Whatsapp with the newest version via  Android Playstore on your device or doing a Google query in this form: “Latest Whatsapp APK download” to download the .apk file directly from other web servers.

The Video call feature will let you video call your friends with other newer version of Whatsapp also installed at their own end. This feature will be like that of Skype on desktop or Google Duo app on smartphones, where you can chat one on one with some one through video. Both parties can see each other and see whats like at the other end. Which is very cool, video call that person from the other continent! Quite exhilarating if network doesn’t become a constraint.

You can now also send animated GIF’s, moving pictures on Whatsapp which wasn’t supported in previous versions. Moving images could be shared on Groups, one on one chats or sent to some one by selecting it from your device directory. Something like this picture below:

Alright! See what the guys on Whatsapp got to say on the new Video Feature from Whatsapp BLOG:

“Today we’re excited to announce the next step in our efforts to connect people – WhatsApp video calling. In the coming days, WhatsApp’s more than one billion users can make video calls across Android, iPhone, and Windows Phone devices.

We’re introducing this feature because we know that sometimes voice and text just aren’t enough. There’s no substitute for watching your grandchild take her first steps, or seeing your daughter’s face while she’s studying abroad. And we want to make these features available to everyone, not just those who can afford the most expensive new phones or live in countries with the best cellular networks.

Over the years we’ve received many requests from our users for video calling, and we’re excited to finally offer this feature to the world. Thank you for using WhatsApp and we promise to keep working hard every day to improve the service.”

Read also:  Allo another Whatsapp like Chat app by Google