Nokia Smartphones rebirth set for 2017.
Surprisingly Nokia will re-enter the smartphone market this 2017. This was made known by the Finnish company through a slide presentation at Capital Markets Day event. The capital Markets Day 2016 was held 15 of November 2016, below a snapshot which shows the future plans of the brand name Nokia and its return with into the mobile market in 2017: 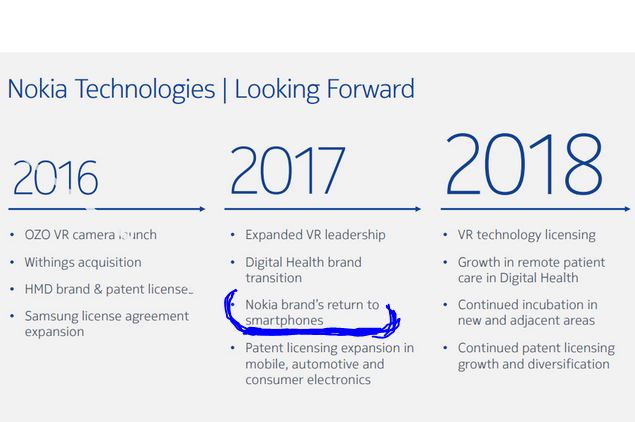 Nokia as a brand in itself won’t make the smartphones, rather through partnership with the Finnish company, HMD Global along side Taiwanese, Foxconn responsible for the desired manufacturing facilities. Both companies will bring Nokia brand back to the smartphone market. HDM will cater for sales and marketing whilst Foxconn will delve into manufaturing aspect. HMD has a ten-year exclusive agreement for using the Nokia brand on mobile phones. HMD will use over 400 million pounds in marketing the smartphones in the first three years of the release.

From little information garnered , Nokia’s first new Android smartphones should be released in the second quarter of next year, 2017. That means CEO Rajeev Suri’s keynote forthcoming address at MWC in February, 2017 may as well include Nokia smartphone unveiling.

The D1C, could be one of the first Nokia branded smartphones of 2017 which should also run the Android 7 Nougat and should feature specification like Snapdragon 430 processor, 1080pixel display screen and 3 GB of RAM.

Precise Specification for the D1C from Antutu, show that the Nokia D1C will carry a display with a 1080 x 1920 resolution. The Snapdragon 430 chipset will provide the phone with an octa-core processing power plus an Adreno 505 GPU to carry out graphics task.  The ram is 3GB along side 32GB of internal storage capacity. A 13MP camera will be placed at the back of the phone and also 8MP camera in the front.