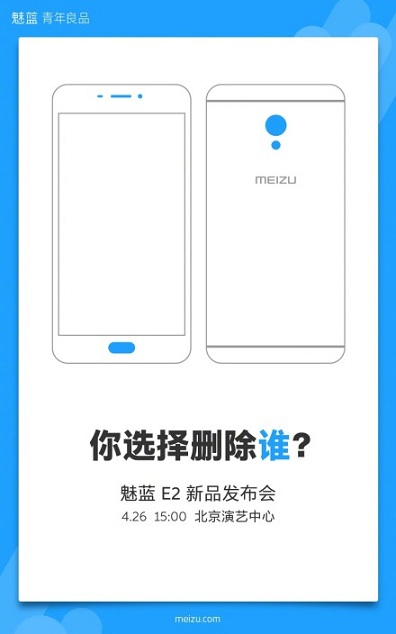 Meizu E2 to unveil in April, 26 of 2017. The smartphone in a teaser image from meizu.com look like the previous M-series in terms of design and aesthetics.

Previously, a device with Model number M612C was certified at TENAA, if this device points to the E2. That means from the spec listing, the E2 will come with an Octa-Core Processor, 4GB of RAM and 1080p display.

If the TENAA listing were to correspond with the model, then other specs, include, a 13MP rear camera setup, metal unibody design and 5.5 inch screen size.

The Meizu E2 release is slated for late April 2017, as stated earlier.

Going by the specification of the Meizu E2 smartphone, we could see the device falls in the mid-ranger category, slightly above the budget low end type of smartphone running on Lite Android apps.

At least since, the pricing is slightly above the 100 USD range. Should be quite affordable and packed with the much needed specs you would expect for every day task.

Meizu E2 comes with three network supports like most smartphones, that is GSM, HSPA and LTE.

The smartphone is a Dual Nano SIM type. The display is a IPS LCD capacitive touchscreen type with 16M colors.

The smartphone runs on the Customized Android 7 Operating System, that is the Flyme 6 which also can be upgraded to the latest Android OS.

The GPU is a Mali-T880MP2 type good for gaming and other graphics demanding applications.

The built in storage is a 16GB/32GB and 64GB type. With 2GB/3GB and 4GB RAM options. The smartphone also has an expandable slot that you can outsource for additional storage via microSD card to up 256GB.

The main camera is 13MP with f/2.2 and PDAF. Features of the rear camera includes, Quad-LED dual-tone flash, HDR and panorama.