The iPhone X was unveiled alongside the likes of the iPhone 8, iPhone 8 Plus, Apple’s 4K TV and Apple Watch Series. Apple iPhone X is the first of it’s kind to come with the True colour Super Retina AMOLED display technology.

Let’s get started with all of the features of the iPhone X, in terms of it’s description and specifications: 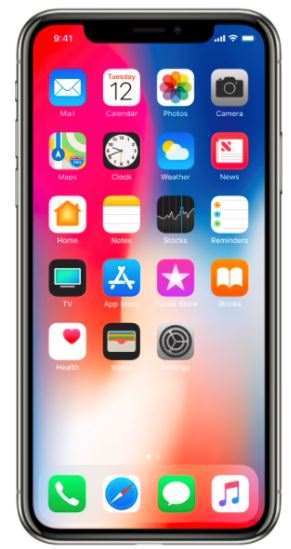 iPhone X screen comes with a 5.8 inches design with display resolution measuring 1125 pixels by 2436 pixels in size and an aspect ratio of 458ppi pixels. The iPhone X pose, of sporting the best display ever made into a smartphone. Coupled with the almost no bezel design finish of the Super Retina Display.

What next?, of course you can also immerse the iPhone X into water and go scot-free. The iPhone X is water and dust resistant going home with an iP67 rating, just as seen in the iPhone 7.

Coming down to security stuff and other stuffs related to that: We have the Touch ID system now replaced and overhauled with the Face ID. This means you use your face to unlock the device rather than using your fingerprint touch. This new touch system, Face ID, implemented into the iPhone X beats the one found in the Samsung Galaxy S8/S8 PLus, that is the Iris Scanner. Why? because, even in the dark you can use the Face ID to unlock the iPhone X via the flood illuminator system inside of the iPhone X. Why the Note 8, S8, S8 Plus isn’t capable of such feat. The Face ID, is also a more secure means of unlocking, with Apple, claiming it to have a failure rate of 1000000 to 1 as opposed to Fingerprint ID systems with failure rates of 50000 to 1. One flaw which comes with the FACE ID system, is that identical twins can both unlock the device.

The iPhone X, as also come with few modification to the way the device is used that may become new to some users. Points to note when using the iPhone X:

Coming down to the engine and onboard hardware specification: The iPhone X, is powered with the Apple A11 Chipset which has inside of it 2 efficient Cores. The chipset also has near it, the Graphics processor, GPU, which handles for all of the graphics needs. The GPU found in the iPhone X is 30 times faster compared to the GPU found in the chipset in the iPhone 7 A10 chip.  The RAM is 3GB while the built in storage is 64GB. There is also, another options with 256GB of built in storage.

As for the camera, the iPhone X, comes with a dual 12MP+12MP camera. With aperture of f/1.8 for the first, while the second comes instead, with f/2.4 aperture. The rear camera comes with ability to shoot videos in 4K @60frame rates per seconds- fps. 60fps at 4K, until the iPhone X, most smartphone haven’t being comfortably able to accomplish such feat.

Wireless Charging system is also included in the iPhone X, the charging implements the Q1 Standard. The wireless charger which comes alongside the device can also charge the Apple Watch and Airpods. This charging system is referred to as the Apple’s, Air Power.


iPhone X is priced around $1000 and comes with option to opt for either for the 64GB variant or 256GB variant , all depending on the price tag you willing to pay. configurations. The iPhone X is sold across more than 57 countries in the world including, USA, CANADA and UK.