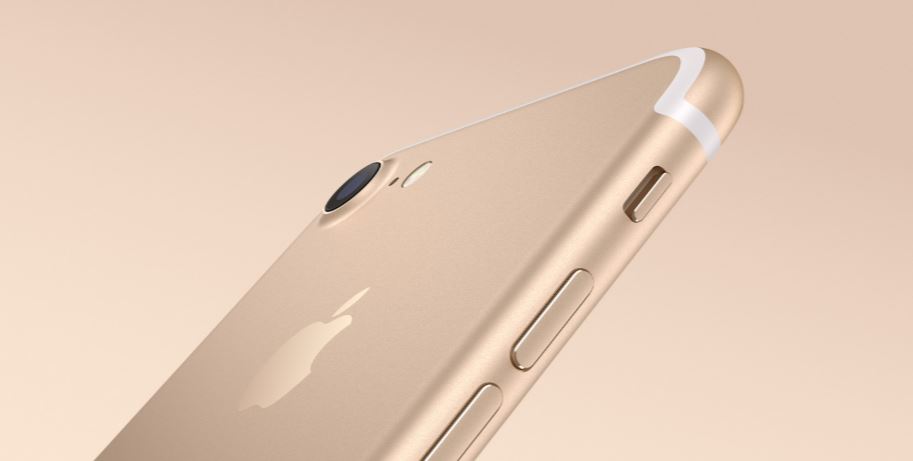 iPhone 7 dramatically improves the most important aspects of the iPhone experience. It introduces a new advanced camera systems. The best performance and battery life ever in an iPhone. Immersive stereo speakers. The brightest, most colorful iPhone display. Splash and water resistance. And it looks every bit as powerful as it is. This is iPhone 7. 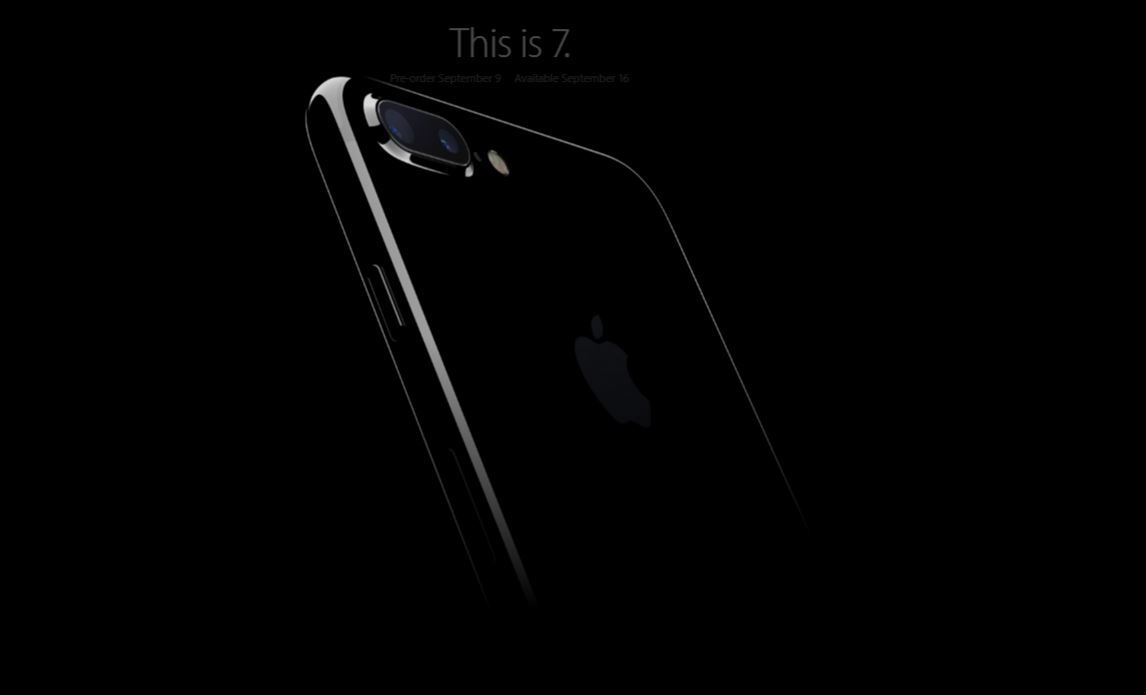 iPhone 7 reaches a new level of innovation and precision. The jet black finish is like nothing like ever seen before. The enclosure is splash and water resistant. The Home button is completely reengineered. And with a new unibody design that’s seamless to the touch, iPhone 7 feels as amazing as it looks.

With the introduction of a new beautiful black matte finish and a deep, high-gloss jet black makes the iPhone 7 and iPhone 7 Plus stand out. Both the 4.7-inch and 5.5-inch models, which were constructed with incredibly strong 7000 Series aluminum are also available in iPhone’s signature silver, gold, and rose gold finishes.

Crafted from bead-blasted aluminum, the new black model of the iPhone7 and iPhone 7 Plus has a rich, deep matte finish. The high-gloss jet black finish was achieved through a new feat of design engineering, a remarkably precise, nine-step process of anodization and polishing. The end result is so purely and continuously black, you can’t tell where the aluminum ends and the glass begins.

With its entire enclosure re-engineered, iPhone 7 is the very first water‑resistant iPhone. So now, Apple promises us we are protected like never before against spills, splashes, and even dust.

The Home button on iPhone 7 is an advanced solid-state button designed to be durable, responsive, and pressure sensitive. Working in tandem with the new Taptic Engine, it gives you precise tactile feedback as you press. And it’s even customizable.

Read also:  Asus Zenfone 2 to include support for VoLTE in 2017 India

iPhone’s camera, is the most popular camera in the world. Now the beloved camera has been rewired, adding optical image stabilization, an ƒ/1.8 aperture, and a six-element lens to make it even better for shooting photos and videos in low light. And with advanced new features like wide color capture, your photos and Live Photos will look even more vibrant.

iPhone 7 Plus doesn’t have just one entirely new camera system, it has two. The same 12MP wide-angle camera that’s on iPhone 7 works with a 12MP telephoto camera that can get even closer. That means you can get higher-quality zoom from farther away. And with an all-new depth-of-field effect which is coming soon, portrait shots will look better than ever.

With the dual-camera system and breakthrough ISP technology on iPhone 7 Plus, you can now get supersharp close-up photos and videos with optical zoom at 2x. And you can get even closer with improved digital zoom that lets you shoot at up to 10x for photos and 6x for video. Depth of field allows you to keep faces sharp while creating a blurred effect in the background. When you take a shot with iPhone 7 Plus, the dual-camera system uses both cameras and advanced machine learning to make your subject sharp while creating the same out-of-focus blur in the background, which is known as the bokeh effect, which was previously reserved for DSLR cameras. So no matter what’s behind your subject, it’s easy to create a great portrait

Using a highly advanced fingerprint sensor that’s as fast as ever, Touch ID makes unlocking your iPhone easy and secure. When you use the 3D Touch, your iPhone responds with subtle taps. So not only will you see what a press can do but, you’ll feel it too. The new Retina HD display on iPhone 7 deeply integrates 3D Touch throughout iOS. This lets you interact with Messages, Calendar, Mail, and other apps in a more powerful, more responsive way. 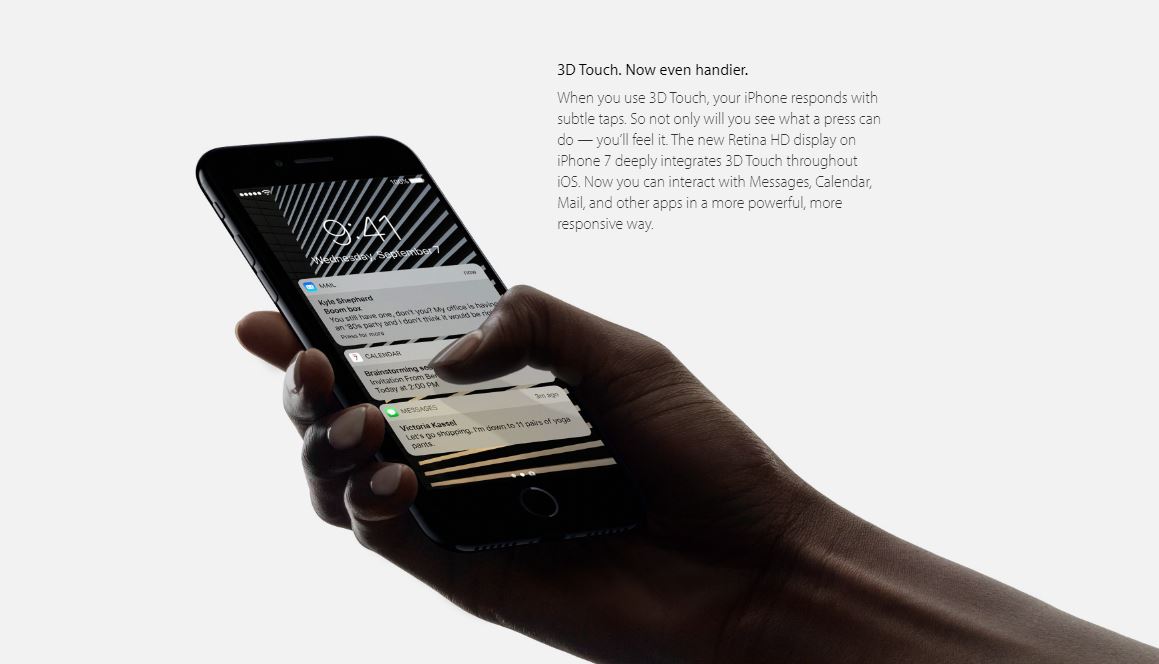 Almost everything you experience with your iPhone comes to life on its display. It’s where you look at the photos, messages, news, and countless other things that make up your day. The iPhone 7 display uses the same color space as the digital cinema industry, so what you see will be noticeably more brilliant and vibrant. Because we all deserve a bit more brightness in our day.

With a new wide color gamut, the Retina HD display is able to deliver cinema‑standard colors and the best color management in the smartphone industry. More shades of the color spectrum can be used to create an image, meaning that what you see on the screen is a truer representation of the world. So whether you’re checking out photos of that perfect dress or Live Photos you took in the tropics, the colors will be so accurate, it will look like you’re there. 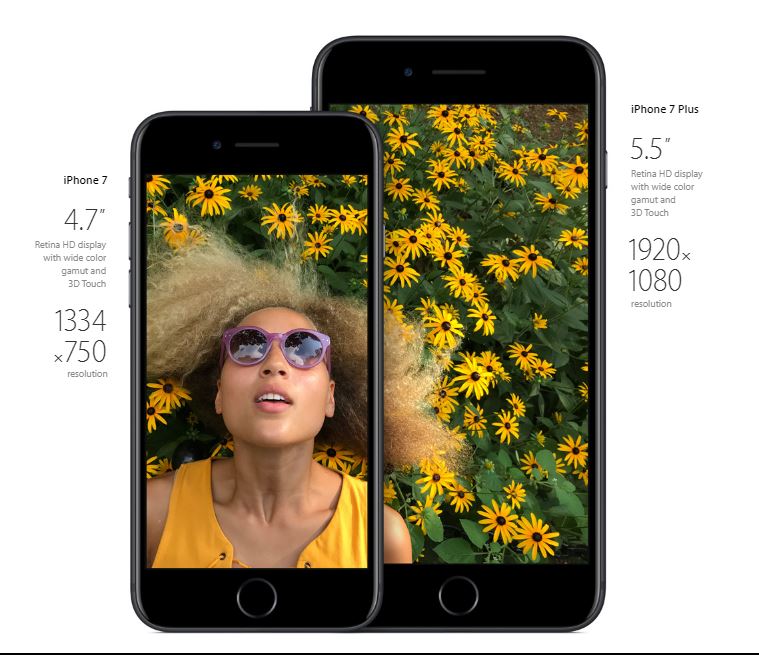 iPhone 7 is supercharged by the most powerful chip ever in a smartphone. It’s not just faster than any previous iPhone; it’s also more efficient. That’s because the A10 Fusion chip uses an all-new architecture that enables faster processing when you need it, and the ability to use even less power when you don’t. And with the longest battery life ever in an iPhone, you can work at twice the speed of iPhone 6 and still enjoy more time between charges.

With the A10 Fusion chip, you will take advantage of up to two more hours on iPhone 7 and up to one more hour on iPhone 7 Plus than the previous generation. iPhone 7 doubles the capacity of iPhone 6s across the line to 32GB, 128GB, and 256GB.

For the first time, iPhone comes with stereo speakers, delivering two times the audio output of iPhone 6s and increased dynamic range. So whether you’re listening to music, watching videos, or making speakerphone calls, iPhone 7 lets you boom up.

iPhone 7 comes with EarPods that have a Lightning connector. But if you still want to listen through your old headphones, you can plug them in using a 3.5 mm headphone jack adapter, also included.

iPhone 7 features LTE Advanced, with speeds up to 450 Mbps for data downloads, which is over 50 percent faster than iPhone 6s and three times faster than iPhone 6.  And thanks to even more LTE bands, which promises you the best worldwide roaming available in a smartphone. iPhone 7 supports Voice over LTE — high‑quality wideband calls that make your conversations sound as crisp and clear as if you were face to face. When you’re unable to get cellular service, Wi-Fi calling provides an easy way to make and receive calls over a Wi-Fi connection. And now both are supported on even more carriers around the world.