With YouTube TV you get to watch live TV stations like CBS, FOX, NBC, ABC and many more cable TV networks. YouTube TV offers live sporting programs, TV shows, Movies and DVR without having to worry about the storage limits through paid subscription.

Though, there is also a free offer, you can test the service for 1 month completely free. If it makes sense to you, you get to pay around $35 per month subsequently.

Youtube TV is now expanding its location base, with more US location now getting the service which brings you live transmission of popular cable networks, premium TVs and broadcast networks. Simply put, you get to stream live TV without the cord. A previous announcement of the Tech giant, Google was to have the TV service go across most states in the United States. As for now, if you reside in this US states, listed below you can try out to see what the service is really like, even when you are not, you can still get the service, but limited to some stations. Read on.

With Chromecast you can watch it on your Television set via your mobile device, tablets. YouTube TV works on PC via web browser, Android, iOS(iPhone & iPad).

To use Youtube TV service, you need reside in one of the several areas listed below. To use the service simply signup using the procedures listed below.

Areas which support the Youtube TV service in United States include: 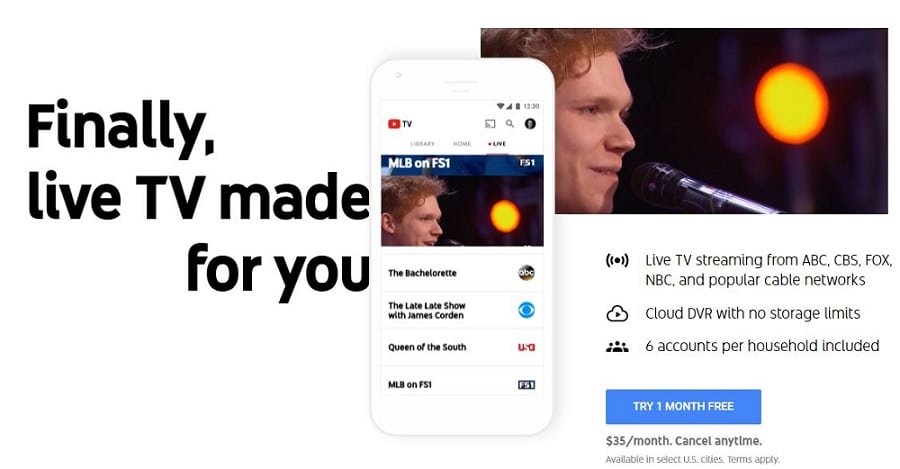 Here are the available locations which supports the Youtube Live TV Broadcast above. If you live in any of this US areas, read on to see how you can quickly setup Youtube TV on your Device. Even when you don’t reside in any of this locations, you can still have access to some of the services, read on for more.

How to check if YouTube TV is Supported in your Location

If you are not sure whether YouTube TV works in your current location, you try this below process to see:

Once applied and signed up for YouTube TV, the service works everywhere in U.S location. If your location has the YouTube TV service, you will have access to watch live national networks, local networks and also recordings. If you reside in a location where the service hasn’t been launched in the U.S, you would not have access to live networks, but will be able to watch national networks and recordings you make inside of your library.

Here are part of TV network stations you can get on YouTube TV:

You can also fill out a form to Google stating any TV network you would love to see on the listing. Some of the networks are location based.

YouTube TV works with different devices and platforms. Here are the supported devices which works with YouTube TV.

You can use YouTube TV on your computer, mobile or TV (Chromecast). Here are the available viewing options for YouTube TV.

You own a Mac or PC, you can use the YouTube TV service. Simply, download the latest version of Chrome browser, and enjoy the best HD viewing experience ever.

Television sets which come with Chromecast built-in, like Android TV, Apple TV or AirPay can use YouTube TV. The service will expand to support more devices and platforms, subsequently this service may become available on gaming consoles etc.

It is always important to keep your Android device up to date, to the latest OS version. Goto to Settings>>About>>System Updates, check whether you device is up to date. If not up to date, simply update it when there is internet connection.

YouTube TV works with iOS 9 devices or later. Any iPhone or iPad which runs the iOS 9 or later.

More details on supported platforms from this link.