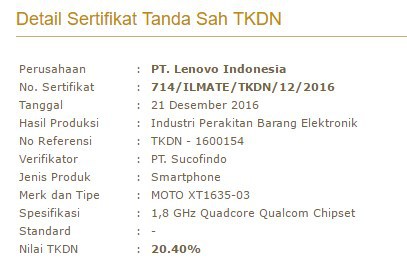 The Moto Z Play isn’t a new device that just leaked. Its been around already in smart phone market with 2.0GHz octa core Snapdragon 625 chipset. This newly found Moto Z Play listing is another variant presumably with lower specs and thus, attracts a reduction of price when finally unveiled by Motorolla in the smart phone markets compared to earlier Moto Z’s price.

The new release of Moto Z play may come packed with new Android Nougat 7.0 following the Nougat upadate as seen in the current Moto Z play.

Where to Buy Motorolla Smart Phones in Nigeria:-

The smartphone clearly falls in the budget mid-range category of android smartphones.

As for the detailed specification of the smartphone, it’s given thus as, network support of GSM, CDMA, HSPA, EVDO and LTE network technologies.

The device body design is such that it is built with a Corning Gorilla Glass 4 front Glass material and the back of the smartphone with a aluminium metal while the frame also is built with aluminium.

The SIM type is a dual nano SIM while the display is built with AMOLED capacitive touchscreen. Comprising of 16M colors.

The display as stated earlier is further reinforced with a Corning Gorilla Glass 4 protective Glass for against fall and break.

The Moto Z smartphone comes with various internal storage and RAM options. Given as, 32GB and 4GB RAM, 64GB and 4GB RAM.

The selfie camera is a single 5MP unit with f/2.2 aperture and its video recording can max at 1080p@30fps.

The Sensors is a Fingerprint front-mounted accelerometer, gyro, proximity and compass.

The battery is a Non-removable Li-Ion 2600 mAh battery which has a Fast battery charging of 15W.