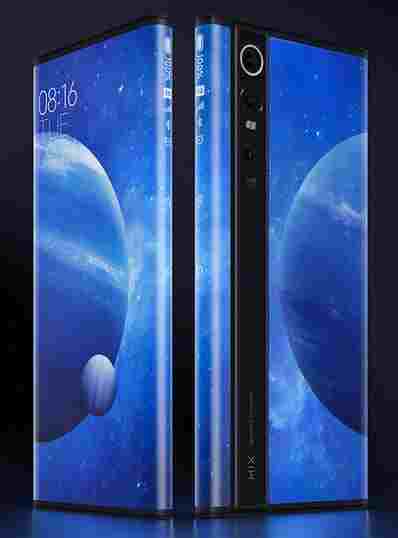 Xiaomi Mi Mix Alpha is one of the earliest 5G smart phone released by Xiaomi. The smartphone was tossed out in 24, September of 2019. It features a concept kind of design as never seen before.

The main selling point of the smartphone is what the company calls the 4D surround display. The smartphone is designed such that it’s just screen all over it. Like 99 percent screen. No bezels kind of design as seen in the Mi Mix.

The icons and notifications of the smartphone are position at the sides just as seen in the image above while a small non-screen portion stretches from the top to the bottom which houses the rear camera.

Overall the smartphone is a concept type. And is only meant to be available to limited few. Probably in the Chinese market for a whooping 2K+ Dollar.

But again, if this design is accepted and embraced will could start seeing it in future smartphones.

The Mi Mix Alpha is 241g in weight and is 10.4 mm in thickness. The smartphone is powered by Android 10 running the MIUI 11 operating system. Which is also upgrade-able to the latest android OS through OTA.

The body design is made of Titanium Alloy Frame TC4 and Ceramic Back Strip.

The screen is a flexible super AMOLED Capacitive Touchscreen type with 16M colors.

Mi Mix Alpha is powered by Qualcomm Snapdragon 855+ chipset, as seen in the Mi 9. The chipset is 7nm in size. The chipset houses an Octa-Core Processors. Coupled with an Adreno 640 Graphics memory.

The built in storage is 512GB with no option for expanding via MicroSD card. That’s enough storage space for a mobile user. The RAM of the smartphone is 12GB. That’s a pretty big RAM to cover for all of the multi-tasking and gaming experience.

The battery is a non-removable Li-Po 4050 mAh capacity type. With 40W fast charger. As for the smartphone color. It is pretty much everything screen except for the black stripe.