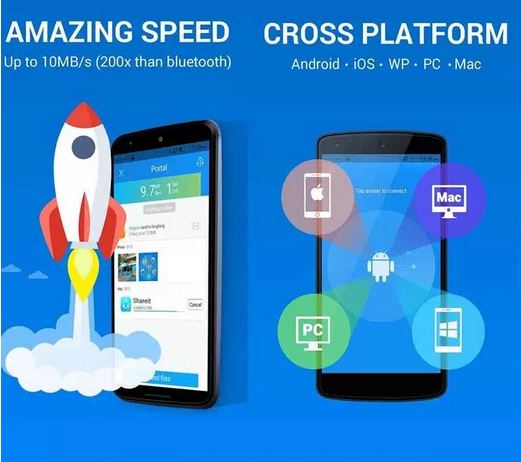 Shareit falls in the Xender category type of software, there is hardly any android user that doesn’t know what Xender or Flashshare is.

Shareit has an edge over both apps because it not only runs on Android, but, also runs on PC and other platform.

This means you can use Shareit to transfer either ways between your PC to an Android device.

The new update of the app brings it to Shareit version 3.88_ww which runs on iOS devices(iPad or iPhone), Android, Windows Phone (Lumia) and Mac and comes with the Share Zone feature.

This feature, lets you share with friends in new, fun and exciting manner without the divide between Physical connection or the internet.

Shareit claims to be the fastest sharing app on the Android platform. More info on download and install via link below:

The below provided above takes you to where you download the application on your mobile in the .apk file format for android.

Firstly to download the application for your android device is easy and straight to the point.

You would go to the link and download. After downloading, then locate the application in your mobile android phone usually through your file manager in the downloads folder.

After locating the apk file, all you have to do is quickly tap on it then you get a bpop up to install. Simply follow the steps and click on Yes all through.

Not everyone uses android device. Some people use iPhone and iPad device which run on the iOS operating system. For such users, using Shareit isn’t also limited or constrained.

There is a link also in the app store to download and install the application on your iOS device.

Below is a link for iOS users to download the flexible sharing application.

After the installation, you would also want to get the Desktop format in PC and Mac.

Below is the Download Link for MAC and PC of shareit:

How to use Shareit:

Using Shareit is pretty straight to the point. After downloading and installing the app on both your smart phone and computer.

And some form of sync takes place. Bam! you all set and ready to begin sharing from both ends.

The rest of the steps is pretty self explanatory. Have any questions on using Shareit, do leave a comment below. Thanks for reading. Do share with friends.