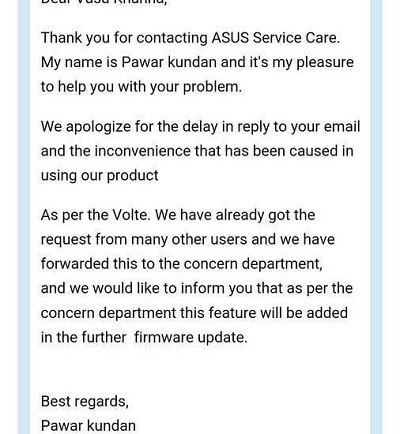 This new development was made known by the Asus technical support rep for VoLTE on Asus Zenfone 2 ZE551ML model. Not surprising at all, because, the demand for devices with support for VoLTE band as surged in India.

Asus Zenfone 2 impresses with its mid-range specification and thus falls in the budget category of android devices.

A more detailed look into the Specification of the smartphone is given thus as:

The material that the smartphone was built, is a black plastic back casing while the front of the smartphone is covered by the glass build of Gorilla Glass 3 protection. The device also embodies a plastic frame.

As for the SIM type, it is a nano dual sim smartphone. The display of the smartphone is IPS LCD capacitive touchscreen type with 16M color variations.

The screen as stated earlier is reinforced with a Gorilla Glass 3 layer as a protective medium from against dust and scratches and break.

The Chipset of the smartphone is the Intel Atom Z3580.

The RAM options includes 2GB and 4GB RAM variants. While the GPU is PowerVR G6430 type. The internal storage of the smartphone comes in 16GB, 32GB and 64GB variant.

Sensors that comes alongside the smartphone includes, Accelerometer, gyro, proximity and compass.

The battery of the smartphone is a Li-Po 3000 mAh capacity battery with the functionality of fast charging. You get almost 60 percent of charge with the 18W power adapter.