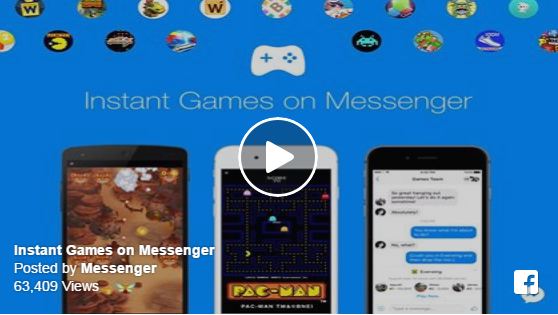 Pac-Man and Words game just came live in Facebook Messenger.
Facebook Messenger if not the second will be the third most popular IM application thats used by quite a number of people to connect with friends. Facebook have gradually been adding newer features to Messenger which makes the app kind of meet up to the trend and also compete with other similar apps in the Chat space. For Facebook Messenger users, the new intros is fun and always welcomed thus, came the inclusion of popular games like Pac-Man, Galaga, Words and Space Invaders to spice it up the more.

Games in Facebook Messenger isn’t something entirely new, we have seen the likes of basketball games and hidden football games added to the IM. Instant Games is set to unveil in 30 countries with 17 games from notable dev like Zynga, King Konami,Bandai Namco etc.

Watch the video above in the link and see how to add up the new Pac-Man feature to Facebook Messenger:

In addition Facebook Messenger users can also discover games in the Messenger Search Field or through Facebook News feed where they can play by themselves, Solo or set a challenge among friends. There are 18 games already in Facebook Messenger app and more free games will be rolled out in the coming months with new updates.