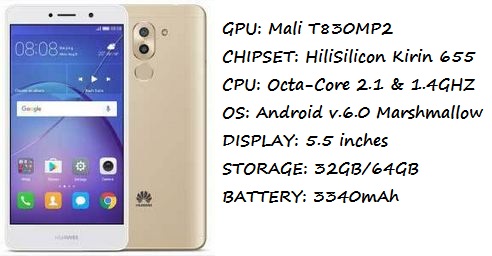 Somewhere around the World, USA, Huawei is set to roll of sales of the GR5( Honor 6X) starting around $249 with free shipping, Selfie Stick, Casing and earphones. This offer is exclusively, in USA starting February 14.

Surprisingly, Kenya isn’t left out, from the countries that will have the smartphone being released officially. Pre-orders can be made already starting around Ksh 34,999 in Kenya. The Twitter Page of Huawei Kenya confirms this, prompting users to place pre-orders in Safaricom Shop, ahead of its dispatch.

Huawei GR5 2017 is powered by a Kirin 655 Processor comes in 3GB/32GB and 4GB/64GB RAM-Inbuilt Storage options. Both models can be purchased based on the price tag. The smartphone can be said to be a mid-ranger with impressive specs for the price. It sports a metallic finished body with 2.5D curved display. The size of Huawei GR5 2o17 is 5.5 inches comes powered with a 3340mAh capacity battery.

Huawei GR5 2017 rear camera is a Dual Combo of 12MP and 2MP units while the front facing camera for selfies and  video chat is 8MP.