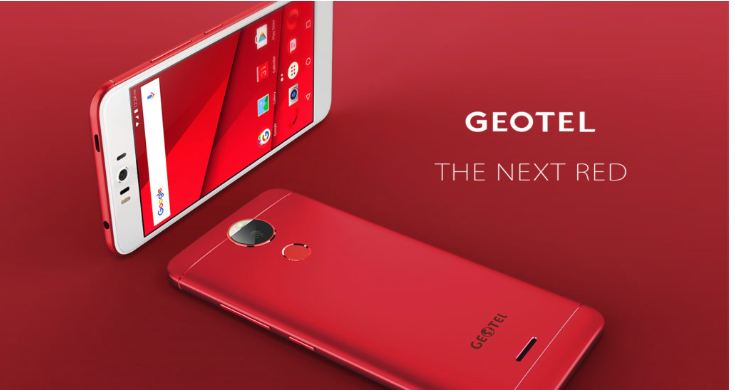 Geotel Amigo in Alpha Red Colour to Unveil in 2017.
Geotel Amigo is a budget smartphone slated for 2017 unveil, the announcement came after Geotel Note was made official.

The Amigo is in rd colour just like the newly red unveiled iPhone 7. Amigo could be said to be inspired by the Red Colour iPhone 7.

Geotel Note is a budget device which sports 3GB of RAM, 3200mAh capacity battery and fingerprint sensor alongside other specs which makes the smartphone stand out for a price tag of $89.99.

The Amigo will sport improved specs and camera and a design form to easily help for grip. Other details will surface in the coming weeks, here is Geotel website for more info.

Geotel Amigo can be classified as a low budget smartphone despite having an impressive RAM of 3GB.

Going by the price tag, the device comes for around 80 bucks, like other budget devices around 100USD and below. The Geotel Amigo seeks to give value for it’s price tag.

One of the selling point of the device, is the red looking color which delights coupled with the white frontal view.

Both work hand in hand to give that premium looking feature.

Geotel Amigo is designed with a 5.2 inches size. The screen is HD type. Comprising a MTK powered chipset.

The chipset is the MTK6753 comprising of an Octa-Core CPU. The device runs on the Android operating system but which can also be upgraded to the latest supported OS.

The inbuilt storage of the device is 32GB expandable via microSD card to up to 256GB.

Overall the Geotel Amigo is a good buy considering the price tag. At least you get almost a decent performance when compared to the budget at hand.

The only downside is the HD screen. But, since, the screen isn’t that demanding. That is, it will consume lesser power from the around 3000mAh capacity battery.

So this means you can get a longer lasting battery when using the device. Some how then, the screen becomes an advantage rather than a disadvantage is this era of FHD screens.