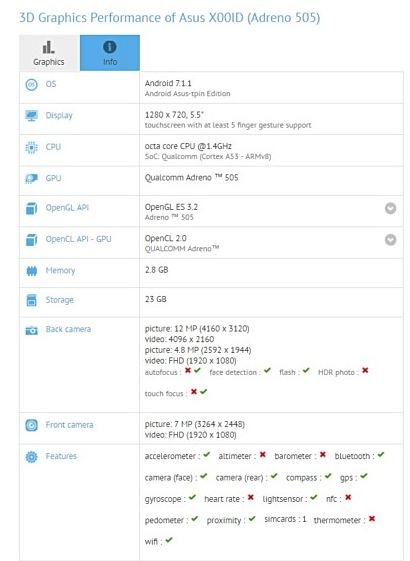 The listing shows a device with model number, x00ID alongside its main specs.

Asus X00ID points to an Octa-Core chipset and 1.4GHz processor speed. The RAM is listed as 3GB with inbuilt storage of 32GB. The size is 5.5 inch with HD display sporting a 720p resolution.

From the specification sheet below we could easily infer that the smartphone should fall in the mid-ranger category like the Huawei 9 Lite.

We could also see that the device is pretty a beastly type going by the specification sheet. Firstly, it’s powered by an high end Snap chipset with octa-core processor and Qualcomm Adreno 505 GPU.

This two combination helps to provide for a smooth gaming experience and also raw power for handling the normal smartphone’s daily operation.

Though, the device is a small type, quite handy and presumably sleek going by the 5.5 inches size.

The device will run on the 7.1.1 android version but can still be easily updated online with a single press when update is due.