With some simple steps, you can get Google’s smart social messaging app, Google Allo, to run on your Desktop PC for absolutely free, just as in how it works normally on any Android Device. If you would like to run Allo on your Desktop PC, then this post is for you.

Installing and getting Allo to run on your Desktop may have one or two advantages. You can easily enjoy the wider viewing option on Desktop and a more robust typing feasibility on Desktop keyboards. 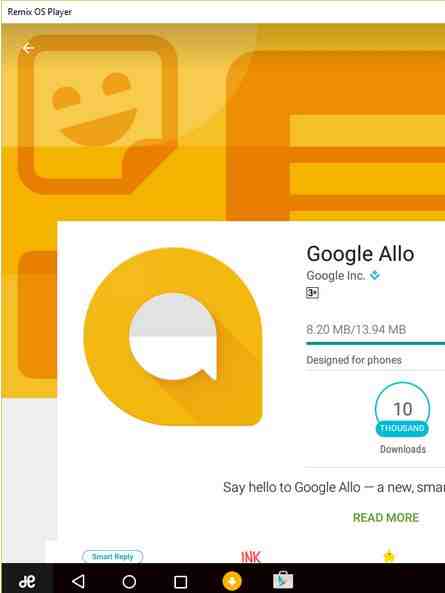 One sure way to get Allo to work on your Desktop PC is to install it via a virtualization app. That is, an emulator which makes Windows Desktop PC seem assive it’s running a Windows application, while, in the actual sense, it is actually running an Android app. A Windows-Android emulator, is more of a Windows app in the background, while inside of it, runs android apps just as in any android device. This means, with android emulator installed on your Desktop PC, one can run any Android app or game one deems fit.

There are quite a number of free android emulators to install on your Windows Desktop PC. Emulators like, Bluestacks, Andyroid, Nox, Remix OS can get the job done in no time. But, will have to get our hands on Remix OS, as this one will ensure compatibility with the latest android operating system. As, Nox and Bluestacks run older android OS, while, Remix OS run on Android 6.0 Marshmallow operating system. This will ensure, we get all features of Allo to work properly on Remix OS for Desktop PC.

Running Google Allo on your Desktop PC is quite straight to the point, however, you would need to note some few things, thus, this:

NB: Already Running Google Allo on an android device earlier, doing a fresh Allo install on a newer device, like Desktop PC will wipe out chats, contacts and other stuffs on your previous Allo setup.