Since the release of iPhone 7, there have been speculation and rumor of the release of the next device (iPhone 8) several multiple leaks photo and features have been speculating the internet. A new photo leak supposedly showing wireless-charging technology designed for Apple’s upcoming iPhone 8 was spotted on Thursday by the gadget-leaks site Slashleaks. Wireless charging is a nice feature to have, as it makes it easy to charge your phone whenever you have a chance to lay it down on a dock. At the same time, wireless charging in Android devices has proved to be slower than wired charging.The feature of wireless charging was first seen in Samsung S8 and S8 Plus. 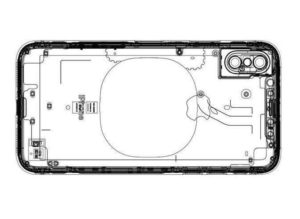 The leak photo appears to show a coil designed which may be inductive wireless charging, as well as an Apple Lightning port on the left where a user would plug in a charging cable. It’s not clear whether the technology would be in a wireless-charging dock or the iPhone itself.

The leak photo of the iPhone 8 features four different holes next to the speaker. It looks like the current iPhone 7, there’s only one hole for the selfie camera, and another for the proximity and light sensor. It could be possible that the next iPhone could have two selfie cameras and maybe a selfie flash?. It is not also clear if the new iPhone 8 will make use of OLED display as propose by Apple to LG and Samsung. 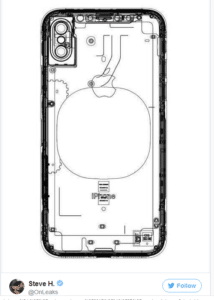 Rumor has it that Apple is going to release three other new iPhones in September. Two of those devices could be updated versions of the iPhone 7 and 7s with better components. The high-end devices could feature a new design with a giant screen.The updates to the iPhone 7 and 7 Plus and most likely “S” versions — are also said to come with wireless charging technology, according to the Japanese news site Nikkei.

If the leaks and rumors are said to be true, the leak would mean that the iPhone 8, expected to be announced in conjunction with the iPhone 7S and 7S (Plus), will have wireless-charging capabilities. However, Apple blogger John Gruber said in a tweet in early July that wireless charging in Apple’s upcoming iPhones would be delayed.

Slashleaks, a reliable source of tech leaks in the past, applied a “100 percent trust score” to the leak, suggesting it feels that it has all but confirmed that the part is destined to work with Apple’s upcoming iPhone 8.

But note that any rumors about the iPhone 8, or any other unreleased product, should be considered just that until Apple makes it official. We expect Apple to announce its new iPhone during its annual event in September.